I had a very upsetting experience this afternoon, and I’m still feeling unsettled by it. I live in the suburbs, and it’s not uncommon to observe many different types of wildlife crossing through my backyard on any given day.  We see deer on a daily basis, groundhogs, rabbits, possum, skunks, raccoons, and a wide variety of birds–from beautiful songbirds and hummingbirds, to birds of prey like hawks and owls.  I’ve seen hawks swoop down and scoop up a sparrow lunch, and stray cats make a meal of an unfortunate chipmunk or squirrel, but today was different.

Just a few minutes ago, I saw a small white dog run through my yard. At first I thought it was my neighbor’s dog, because it had a color, but when I went outside and got a closer look, I realized this one was a bit bigger than the shi tzu across the street.

I tried to coax the dog to come to me, so that I could get a look at its color and call its owner, but it was skittish and hesitated to come any closer.  He looked out into the woods bordering my property, and suddenly, a young coyote appeared out of the brush and starting chasing the dog.   I had no idea he was being hunted, and was powerless to stop it. 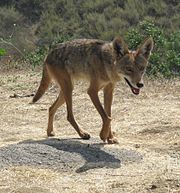 Of course, I tried: I yelled and went running after them, but they both took off at top speed into the woods. My husband and my next door neighbor rushed out to try and help, but the dog and coyote were long gone.

I would love to believe that the dog escaped, but I doubt it.  He was so small, and that coyote was quick. I called the police to report the incident, but beyond that, there was nothing that could be done.