By now, my friends all know that I love testing out “Limited Edition” flavors, especially Oreos and Lay’s Potato Chips. It’s gotten to the point where the minute a new or unusual flavor is announced (Swedish Fish Oreos, anyone?)  the notifications start pouring in on my social media account, with multiple friends tagging me in a photo of the new product. 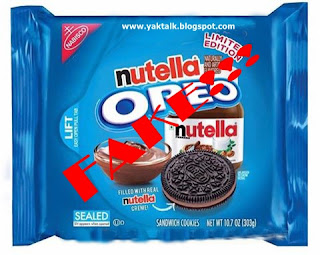 So, when I saw a friend post a photo today of “Nutella Oreos” I knew it was only a matter of time before the image ended up on my own wall.  But several things immediately looked off to me about the photo.  For one, the Nutella product placement was very prominent–almost eclipsing the Nabisco logo. Secondly, I could not find ANY mention of the new flavor being announced through legitimate news sources, just the one Facebook post from the same source.  And finally, there was a website watermarked onto the photo in several places–so large it was obnoxious. I figured it was likely that this was merely a case of an enterprising blogger looking to get hits on his website.

But of course, the notifications DID start rolling in, so I ended up calling the Customer Service hotline for Mondolez International, the parent company that distributes Nabisco (and Swedish Fish, fyi) and they had absolutely no information on any new collaborations between Nabisco and Ferrero Food, the makers of Nutella.

Sorry folks, I’m calling this one BUSTED.  Here’s a copy of the graphic that appeared, but with the watermark removed (and replaced with my own–because, this IS the internet, after all).

UPDATED SEPTEMBER 4th: And now I’m getting messages from friends who’ve seen a similar graphic depicting “Cannoli Oreos”…also with the same watermark from the same website that put out the Nutella one.   THESE AREN’T REAL!  I already contacted Snopes.com, in the hope that they’ll get something up on their website. Until then, just assume these “new limited edition flavors” are a fake unless you see it posted directly from Nabisco.