I’ve been getting quite a bit of email lately about the Dolphin Costume I made for my daughter in 2005, and blogged about last year, so I’ve decided to post detailed instructions on how to make the costume. I used a sewing machine to make mine, but I’ve also included alternative options for those of you who do not sew. Remember: a glue gun and safety pins are your friends!!

First, I started with a simple pattern from Butterick, #6695. 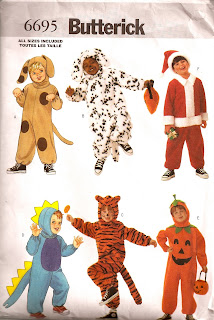 I already had this pattern in the house, because I made a dog costume for my eldest daughter a few years ago (the brown one shown on the top left). I realized that the dragon costume, shown on the bottom left, could be easily adjusted to make a dolphin costume. (*NOTE: If you’re not much into sewing, you could purchase light blue fleece pajamas, hot glue an oval of white felt on the front for the belly, and bam!–instant dolphin body! Or, if you want to be able to wear the fleece shirt again, you could safety pin the white felt so that you can remove it later.)

I added a dorsal fin to the back of the costume. I free-handed a fin onto cardboard (honestly…if I can do it, ANYONE can…my drawing skills are pathetic) and used it as a pattern to cut two pieces of blue lightweight fleece. I stuffed it with batting, and sewed it into the left seam, before applying the velcro. 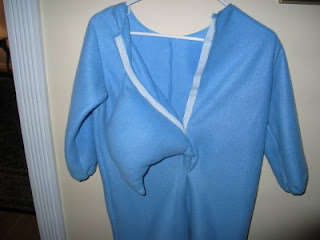 (*NOTE: for non-sewers, cover the cardboard with the felt using a glue gun, leaving about an inch of extra felt along the bottom, extending beyond the cardboard. Use that edge strip to safety-pin the fin to the back of the dolphin body.)

This part is optional, but I also added some crescent-shaped felt pieces to the bottom of the legs (front and back, joined at the corners), so that when my daughter stood with her feet together, it looked like she had a tail flipper. This is a bit difficult to describe, but I think it’s self-explanatory from the pictures: 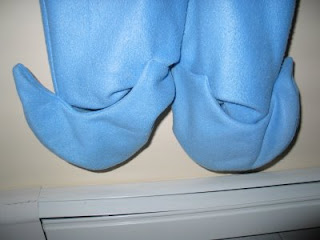 Now…for the more complicated part: the dolphin head. As I said to another blogger under the Comments section of my previous Dolphin Costume post, you could take a shortcut here and use a baseball cap for the basic shape. Cover it in blue felt, add a felt-covered piece of cardboard for the bottom jaw, and be done with it.

However, if you’re even somewhat handy with sewing, you can do what I did, and use the basic head shape provided in the Butterick pattern to get started. I added black felt eyes with a touch of white (for eyeshine) to the sides, and added a top and bottom jaw to make the mouth. 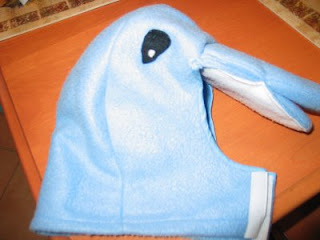 For the jaw/mouth, I took two pieces of cardboard and cut them into U-shape. Then I wrapped them in thin cotton batting (the kind quilters use) and covered them in felt. The top piece was all blue, the bottom was blue on top and white on the bottom.

On the inside of the bottom piece, I hot-glued a piece of hot pink felt for the dolphin’s tongue. 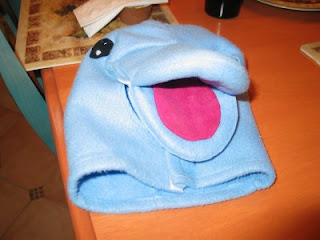 After it was all covered in felt, I bent each cardboard piece so that it was curved in the middle, like a dolphin’s snout. I left a little extra felt at the end of each, and sewed them to the headpiece. Then I tacked them together with a few stitches, extending up 4 inches from the base of the mouth, so that it would hold its shape. 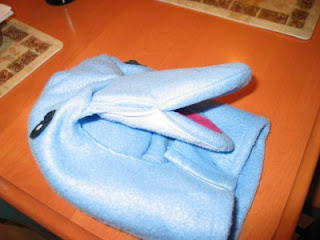 This next step I found necessary because my daughter had a small head, and the weight of the mouth kept making the headpiece fall over her eyes. I used some scrap felt to make a small, round, blue pillow, and sewed into the top of the headpiece, to hold it higher on her head. She found it very comfy, and it gave the top a nice roundness. 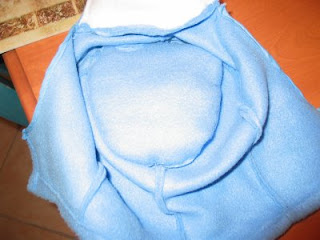 Gosh, folks, I hope these instructions help you. Please let me know if you have any further questions, and please post links to any pictures you have if you do decide to tackle this fun costume. Good luck!!

I hope you find these instructions helpful. 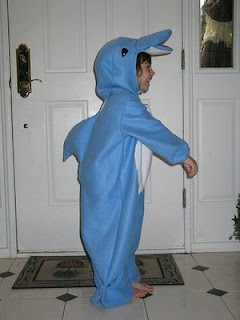 13 thoughts on “The Dolphin Costume: A How-To”