Had some unexpected excitement this past Thursday: the lint in my clothes dryer caught fire.

I was VERY lucky.  I was home, standing right next to the dryer when it ignited, and I had a fire extinguisher close by.   I was able to put the flames out before the smoke got bad, and knew how to pop open the front of the dryer to access the part that was burning.  I had the flames extinguished within about a minute, and the fire did not spread through the ducting to the walls.

I have long been aware of the dangers of lint build-up in a dryer, and learned how to remove the front panel to vacuum the dryer out periodically, which I do. Nevertheless, lint can build up quickly, especially if you’re doing lots of towels and bedding and tablecloths (which, during holiday time, when you prep to have lots of family stay over, tends to happen).  That’s what happened to me.

Many dryers have an automatic shut-off fuse that trips and shuts off the dryer when it starts to overheat.  My dryer was about 15 years old, but the fuse didn’t help in this case because the lint started burning as soon as the ignitor started the dryer cycle.  I think the lint was clogged right next to the ignitor, so when I hit the switch, it sparked and caught.

I put the clothes in, pressed the start button, and within seconds, smelled something burning. I shut the dryer, unplugged it, and then looked down in front of the panel and immediately saw the unmistakable red/orange glow of a flame. Since it was unplugged, I knew it wasn’t a pilot light, and smoke was starting to waft out and fill the room.

I opened the door to the garage to get some air and help vent the smoke out, then ran for the phone to call 911 and grab the kitchen fire extinguisher.  I secured the dog, opened the back door and front door of the house wide so that the Fire Department could come in, all while dialing the phone. There was a plumber heading to my neighbor’s house who parked his truck in front of my house, so I told him I had a Fire Emergency, and to please move his truck because the Fire Department was on the way.

I grabbed a butter knife to try and pry the panel off the dryer so that I could spray the extinguisher, but I couldn’t get the right side off (which was the side where the flame was).  I realized that opening the panel would probably send more smoke billowing towards my face, so decided to try spraying the extinguisher right into the gap between the panel and the rest of the machine.

Meanwhile, the 911 dispatcher told me to just leave it alone and get out of the house.  I said I would, hung up, and decided to give the extinguisher a quick try before complying because the flame was still contained. It took me a few seconds to pull the red clip and figure out that I needed to push down on the top before pulling the trigger, but once I did, I sprayed the dryer with the fire extinguisher and white powder went everywhere. I didn’t see any flame after that, so I popped the panel off (easier now that I was calmer) and sprayed it all again.

At that point, I got my dog and put him into the car, which was still parked in the garage. I realized that I’d better get the car out of there in case the fire had already spread to the walls.  I parked it in my other neighbor’s driveway and–against the dispatcher’s instructions–went back into the house to grab my cell phone.

I should note at this point that I was fairly certain the fire was out, but yes, it was probably not the smartest thing to do, and I don’t advise others to follow my example.
At that point, a policeman arrived, and I heard the worker tell him, “She just ran back into the house.” Thanks, dude. Way to get me in trouble with the cop.

I knew the officer and asked him to come in and help me check to make sure the basement was clear, because I have two cats down there that I needed to get out. He came in, and I asked him to feel the wall behind the dryer, which I couldn’t quite reach, and it was cold–a good sign.  Then he said he wanted to check the vent where it comes out of the house to see if there was smoke. We went around to the back of my house, where the vent emerges under my deck (yes, a very stupid and inaccessible spot for it–but that’s where the builder put it) and all seemed okay.  Then we opened the door to the basement and didn’t smell anything burning, so that was a good sign, too.

At that point, two more police cars, the Fire Inspector and a fire truck arrived.  I took one of the firefighters down to the basement, secured the cats so that I could make a break for it in case things turned dangerous, while he checked the ceiling (where the ducting fed out of the house) with a heat meter.  All was well.

The firefighters took readings with the heat meter all around the dryer, as well as the walls and ceilings in the rooms above and below. They shut the gas to the dryer and took it out of the house for me. 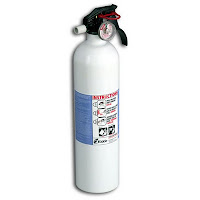 I feel very fortunate to have been able to douse the fire so quickly. The inspector said it was a good thing I had a fire extinguisher in the house–most people don’t.  It costs around $25, and is well worth the piece of mind. They’re a “one-time use” thing, though, so I made sure I replaced mine right away.

If you’ve taken the time to read through this entire post, I hope you’ll do me one more favor: promise me you will NEVER run your clothes dryer, or any other household appliance (such as a dishwasher or washing machine) when you’re not home and able to check on it.  I have spoken to friends about what happened, and so many of them confessed that they leave their washer and/or dryer running while they’re sleeping, or while they’re out running errands, or even when they have kids (teenagers or pre-teens) home alone in the house.  Not a good idea.

I know, it can be a real time saver to have a load of dishes getting cleaned while you sleep or run errands, but refraining from doing so can be a life saver.

The Consumer Product Safety Commission has some great safety tips on their website: Overheated Clothes Dryers Can Cause Fires. If you have a minute, check it out. And please, stay safe!

CLICK HERE TO FIND A FIRE EXTINGUISHER ON AMAZON.COM

2 thoughts on “Fire in the Dryer!”