For years, my youngest daughter was a big fan of the reality show, Dance Moms.  I’ll admit, I had a tough time watching it with her, because 1) the dance instructor, Abby Lee Miller, was SO mean to the girls, and 2) their moms just stood there and allowed it.  Nevertheless, my daughter loved following the drama surrounding dancers like Maddy and her sister Mackensie, Nia, Kendall, and the others, so on Tuesday nights, we’d sit together and watch the screaming matches unfold. She finally outgrew the show about two years ago, but not before we attended a book signing and met with Abby Lee Miller herself. 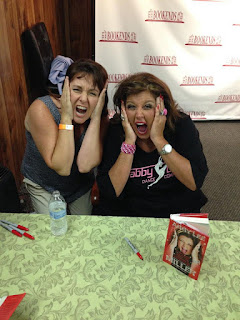 I’ve been to celebrity book signings before, and they are typically crowded, rushed affairs.  This one was no different, but in the past, the authors were always very gracious and kind to the people waiting, allowing the book store staff to play “bad cop” and keep people moving through the line.

Abby was different.  She had no problem barking out instructions directly to moms and their daughters, telling them where to stand, how to pose, and when to move along because there are others waiting.  Definitely Type-A, and I tell you what–it actually brought me a measure of comfort that she was so abrupt and no-nonsense with everyone, because it made me feel like she was showing her true self on the show, as opposed to an exaggerated persona designed to get ratings.

And, she was gracious enough to grant my request that we pose for a picture imitating her iconic screaming pose, featured prominently on the cover of her book.

I’ll admit, I still haven’t read the book she signed for me…one of these days I’ll get around to it.

Unfortunately, Abby ran into some legal problems in 2015 relating to unreported income, and ended up pleading guilty to fraud. She was sentenced today to about a year in jail, with two years probation.  I hope that the time passes quickly for her, and that she can set to work rebuilding her life once she is released. Good luck, Abby!