We’re still in shock over the death of our beloved dog, Scooter, and our house is definitely not the same without him.

The strangest part has been the lack of things to do now that he’s not here–my daily routine has changed so much, so quickly.  No more letting him out last thing before I go to bed, standing outside hoping my neighbors have already turned in for the night so they don’t catch me out there in pajama pants and an old Brooklyn t-shirt. No more filling his water dish and adding kibble to his food bowl before I’ve even gotten my own coffee in the morning.  No more snuggles on the couch, romps in park, or frantic games of indoor fetch on a rainy day.

To keep myself occupied, I went around the house gathering up all of Scooter’s old toys.  I couldn’t bear to see them just sitting there, knowing he wouldn’t ever be playing with them again, so I started to collect them for disposal–but first, I took the time to count them.

The final tally: 81 plush toys, 14 rawhide chews in various states of destruction, 1/4 of what was once a smoked pig ear, 7 tennis balls, 3 frisbees, and 2 stolen catnip toys.  Not too shabby.

Scooter’s life may have been short, but it was well-lived. 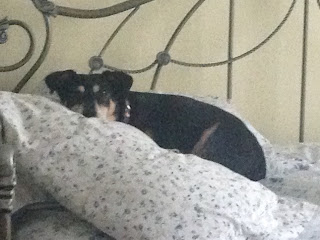