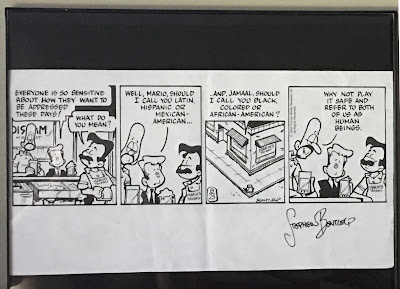 I recently found this comic strip from Stephen Bentley, the cartoonist who created the syndicated strip, Herb & Jamaal.  It was printed in the daily newspaper I used to read when I lived in Long Island, and it was always one of my favorites. In 1995, he held a contest to name a soul food restaurant featured in the strip, and I sent in an entry.  Of course, I cannot remember what I submitted, but it didn’t win, so it doesn’t matter.

What does matter is that Mr. Bentley was kind enough to send each entrant–even us losers!–a signed comic strip reproduction, which I’ve kept all these years and finally put in a frame. I received this on April 25, 1995, and it’s every bit as relevant today as it was then, if not more so.  In fact, it’s downright eerie how much the man in the suit bears resemblance to a certain Presidential candidate.