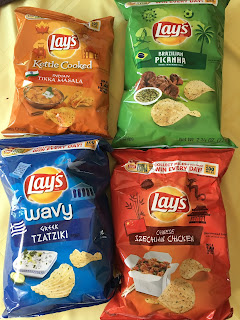 Ah yes, it’s that time of year again…time for the Lay’s Potato Chip flavor contest, where they release new “limited edition” flavors. In the past, flavor ideas were submitted by the general public, narrowed down to four entries, and then consumers were asked to try each one and vote for their favorite. It was dubbed the “Do Us A Flavor” contest.

This year’s contest is a bit different, and has clearly been revamped to increase sales in a big way.

This time around, the contest is being billed as the “Passport to Flavor,” and each of the 4 entries is based up on a different type of international cuisine.   This year’s contenders: Indian Tikka Masala, Brazilian Picanha, Greek Tzatziki, and Chinese Szechuan Chicken.  The bags feature the flag of each country on the front, along with iconic symbols that relate to the culture of that country (a soccer ball for Brazil, the Parthenon for Greece, etc.).  Nice touch.

The big twist this year is that instead of voting for which one you like best, you’re encouraged to enter prize drawings and contests to win trips to each of the four countries featured.  You enter in the last 5 digits of the UPC code on the back of the bag, and then the “bag code” found on the front, just below the “Sell By” date, and you are awarded points that you can trade in for contest entries, and passport stamps for the trips to China, India, Brazil and Greece. I received 100 points for each 2 3/4 ounce bag…I’m assuming larger sized bags will yield more points.

So, after entering in the codes for the 4 bags I purchased in order to review the flavors, I received 400 points total, and 6 passport stamps (some bags awarded more than one stamp).   I currently have 1 on my China passport, 2 for Greece, 1 for India, and 3 for Brazil.

The points themselves can be accumulated and traded in to enter the Grand Prize Drawing–a trip around the world for two, which will set you back 1600 points for one entry.  Or, you can try for some smaller prizes, like noise-cancelling headphones (100 points) or 2 plane tickets to Los Angeles (200 points) or a Trip for 2 to Charleston, SC (400 points).  Additonal prize drawings will be opened up in the weeks ahead, while others expire soon.

Overall, a very smart way to get people to buy more than just 4 bags. Kudos to the Marketing Team at Frito-Lay for coming up with that one.

Enough about the contest–on to the flavors! 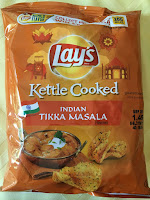 Indian Tikka Masala  — I tried this one first because it was the one I was most looking forward to tasting. I love Indian food, and chicken tikka masala is one of my favorites.   I was disappointed from the start because these chips are the Kettle Cooked variety, which means they’re smaller and more crunchy than traditional chips, and tend to be more greasy.  In terms of flavor, I liked this one very much, even though the texture was a bit of a letdown.  There is no discernible meat flavor of any kind, even though the front of the bag depicts Chicken Tikka Masala–and that’s a GOOD thing.  All that comes through is the tumeric, a touch of tomato,  and other Indian spices.  A solid contender. 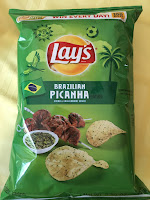 Brazilian Picanha  — I wasn’t sure what picanha was, but the description on the back says it is “Brazilian steak, skewer-grilled with coarse salt” and featuring a “chimmicurri sauce.”   While I was happy to see that these chips are the traditional thin chip variety, my hope of having a good flavor experience immediately ended the moment I opened the bag, and the…unique….smell of these chips wafted out.  Ooooh boy.  I tried to think of a way to describe the pungent aroma, and the one word that came to mind immediately was “gamey.”   The taste of the chip itself confirmed that “the nose knows.”  Yeah, you guys, these were not good.  While they certainly score points for being imaginative, it was just too weird and, for me, downright unpleasant.  I will not be buying these again. 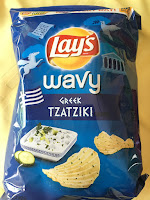 Greek Tzatziki — Ahhh, redemption.  These were fantastic, and as soon as I opened the bag, I knew they would be. I feel like the folks at Lay’s really stacked the deck for this one, because they’re  produced in the “Wavy Lay’s” style, so the chips are larger, thicker, and have ridges to hold more flavor.  They nailed both the aroma and flavor of tzatziki, with discernible notes of garlic, dill, lemon, and greek yogurt.  SO good–I would definitely buy these in a larger sized bag. 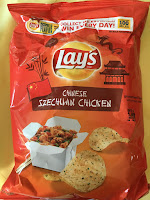 Chinese Szechuan Chicken — I was a little afraid to try this one, but was relieved to find that there is no discernible chicken flavor whatsoever, despite the name.  What you do taste is SPICY–after 3 or 4 chips my tongue was burning and I was ready to stop, even though these are the thin-chip variety.   They’re delicious, and before my taste buds lost their will to live, I also detected a hint of bell pepper flavoring.  I don’t think I could eat more than a few of these at one time, but my husband absolutely loved them.  These were his favorite, so there’s a good chance I’ll be picking up a larger bag of these, as well.

FINAL VERDICT:
The clear standout winner for me personally was Greek Tzatziki, with the Tikka Masala a distant second (if only they weren’t kettle-cooked, they might have had a better shot).  Szechuan Chicken came in at #3 for me (but was #1 for my husband), and at the bottom, dead last: the downright unpleasant Brazilan Picanha.