Unlike last year, it didn’t take me long to find all 4 of the Flavor Finalists in the annual Lay’s Potato Chips “Do Us A Flavor” contest–I found them all in one place, at Walgreen’s.

Interesting note: while the store had small bags of all 4 flavors, sale priced at 2 for 2.50, they barely had any of the New York Reuben flavor.  I’m not sure if that’s because they sold so many of them, or if they just didn’t order that many of that particular flavor.  More on that in a minute…
Here the 4 finalists: 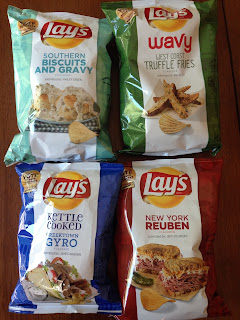 Until you’ve sampled the flavors for yourself, I highly recommend seeking out these small, 2 3/4 ounce bags, rather than the large-sized versions…because I predict that some of them end up in your trashcan.
Another interesting note this year: the chips are not all the same style.  The Reuben chip and Biscuits & Gravy chip are both the standard, thin variety, while the Gyro flavor are small, extra-crunchy kettle-cooked chips, and the Truffle fries are made in thicker, wavy style.  Here they are, side by side: 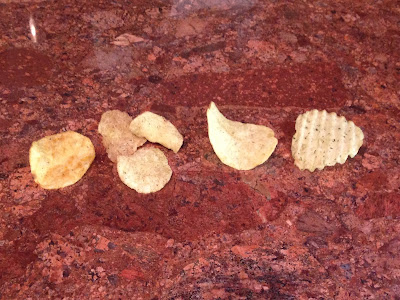 From left to right: NY Reuben, Gyro, Biscuits, and Truffle
First up: as a native New Yorker, you know I had to try the New York Reuben first, because my birthplace always comes first in my heart. 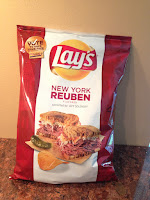 As soon as you open the bag, you get a strong smell of corned beef on rye. Uncanny, really, how closely they were able to nail that aroma.  This carries over to the flavor the chip, which tasted very much like a reuben sandwich.  They could not have done a better job duplicating the flavors found in a reuben platter (corned beef, rye, even a hint of dill from the pickle).  So kudos to Lay’s for that.
Unfortunately, those flavors, while absolutely delicious in a sandwich, were incredibly weird coming from a potato chip.  I would much rather have an actual rueben sandwich–which clocks in at about 535 calories–as opposed to an entire 2 3/4 oz bag of these NY Reuben chips, which will set you back a whopping 430 calories, without being nearly as satisfying.
Next up: Greektown Gyro.
I was excited to try to this flavor, because my husband grew up in an area known for its large Greek population.  I love a good gyro, and had high hopes for this one. 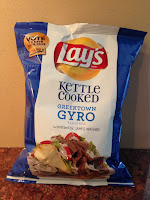 The aroma when you open the bag isn’t nearly as strong as with the Reuben chips, and it’s a smell that’s difficult to place.  I think the most prominent scents are oregano and dill. Okay, so far so good.
Sure enough, the flavor profile was primarily oregano and dill, with hints of tomato,onion and sour cream, but also an interesting “charred” flavor that is very reminscent of the taste from rotisserie-cooked gyro meat. Not sure how that was achieved, but it again, kudos to Lay’s on that.
The kettle cooked style for these chips was a little off-putting. Gyros are many things, but crunchy is not one of them, so the disconnect between the flavor and the texture was a bit jarring. And, as with the Reuben chips, it was an odd flavor to experience on a potato chip. Not something I would buy again, for sure.
One interesting note: of the 4 finalists this year, Greektown Gyro has the lowest calories: 410 for an entire small bag, as opposed to 430 calories for the other flavors, with just 8 grams of fat–that’s still high, but a full 2 grams less than standard Lay’s chips and the other flavor finalists.
And now, on to Biscuits and Gravy.  This is the one I was most afraid to try, because I’m not actually a big fan of real biscuits with gravy.  I like them separately, and I know they’re hugely popular in the Southern United States, but the combo is never something I got fully on-board with.  What can I say? Such a Yankee. 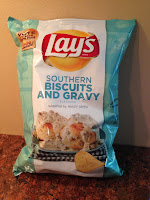 I opened the bag and took a deep whiff, like I did with the others, and smelled….absolutely nothing, other than a faint hint of salt and oil.  At this point, I thought maybe my olfactory senses were overloaded by the previous two flavors, so I tried that old standby: I stopped and smelled some fresh ground coffee to “reset” my scent sensors.  (That’s why they have coffee beans in high-end perfume stores, fyi.)  Took another deep inhale–nada. Hmmmm.

Well, it turns out, the nose knows–because these thin chips don’t really have a distinctive, discernible flavor.  I tried–eating more than I had planned to, just because I kept waiting for the flavor to show up–but it was no use.  The best I can do to describe the flavor is a much weaker version of Ranch or Sour Cream chips, with a slight hint of chicken flavoring.  Sure enough, the ingredients lists Skim Milk, Buttermilk and Cream, but it’s really hard for any one of those to stand out, and you certainly don’t get the same “mouth feel” that you’d get with gravy.  Overall take on this one: blah.
Last but not least, the one that I (and most of my friends) have been looking forward to the most: West Coast Truffle Fries flavor. 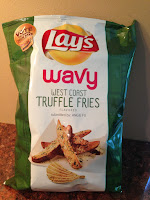 These were done in the “wavy Lay’s” style, and right off the bat, I think that gives them an advantage, because the chip is thicker and the ridges hold more flavoring than the other styles.  The aroma you get upon opening the bag is very faint, similar to the Biscuits and Gravy scent, but even more subtle, which I didn’t think was possible. Just a hint of cheese and salt.
As for the flavor, well, it matched the aroma pretty closely: parmesan cheese, salt, butter, and wisp of garlic.  I would love to do a taste comparison with the Cheesy Garlic Bread flavor from the 2013 contest, because I’m willing to bet it would be hard to tell the difference. I didn’t get any truffle flavor from these at all–I’m sure it’s there somewhere, but it gets completely overpowered by everything else.
I also noticed that these chips are a lot “heavier” once you eat them, as in more substantial. At first I thought it was because they’re wavy, but then I looked at the ingredient list, and saw that, unlike any of the other flavors, the Truffle Fries flavor lists duck fat and chicken fat as two of the ingredients. So perhaps that accounts for the difference.
FINAL VERDICT: This year’s crop of  “Do Us A Flavor” contenders was decidedly disappointing.  Unlike last year, where Wasabi Ginger was such a clear standout winner, it’s difficult to pick a favorite from the 2015 batch.  I can tell you that the bags I purchased of New York Reuben and Greektown Gyro will not be consumed any further–the small taste of each was more than enough. Biscuits and Gravy was too weak-flavored to be offensive, but they’re the Andrew Ridgeley of potato chips–they may belong with the rest of the group, but on their own, they’re pretty forgettable. (Although, in all fairness to Ridgeley, he IS in a committed long-term relationship with the hot brunette from Bananarama, so there’s that.)
So, by default, I guess the “best of the bunch” this year is: West Coast Truffle Fries.  Not surprising, given that it’s a potato-based flavor profile–not much of a stretch to turn it into a chip.
Honorable mention must go to New York Reuben, though, for absolutely nailing the aroma and flavor of a corned beef sandwich on rye. Some sort of devil-voodoo-magic going on in the Lay’s Test Kitchen, I tell you!
If you end up trying out any of these flavors for yourself, let me know in the comments if you agree with my assessment!