Usually, Amazon.com is pretty good about delivering their packages on the expected delivery date–at least, they were until recently.

Last month, in an effort to “improve” their delivery service times, they opened a satellite facility just a few towns away from where I live.  Now, instead of my packages going to the main processing center, they end up at this satellite location.

Ever since, the reliability of Amazon’s package tracking has gone completely downhill.  I’ve had packages say “Out for delivery for arrival by 8pm tonight” that didn’t actually arrive until two days later.   And, when they do show up, it’s in a sketchy-looking unmarked van driven by someone I’ve never seen before, rather than my usual mail carrier.

The latest debacle involved a package that said “Out for Delivery” for arrival yesterday, and then said, “Delivered.”  Except–we didn’t receive the package yet, and no one else on my street signed for it.  The shipment is most definitely not delivered, my husband logged onto his account to find out what’s going on, and that’s when Amazon explains that “delivered” doesn’t always mean “arrived at your house when we said it was going to.”   In fact, on their Customer Service page, they advise waiting 36 hours before you contact the company and report the package missing, because there can be a THREE DAY lag between when the Amazon system says “delivered” and when the package actually hits your doorstep: 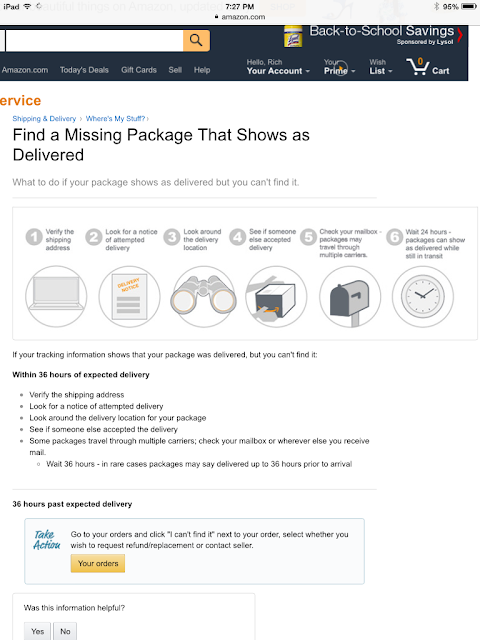 If this is what “improved service” looks like, no thanks–I’d rather have my stuff routed through the central processing center, where at least I could rely on the tracking information being truthful.