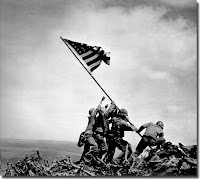 No, I’m not referring to Thankgiving, but to that other November holiday: Veteran’s Day.

It’s today, by the way. Not that you would notice.

School is still session, and no one I know has off from work, other than the mailman.

I remember Veteran’s Day being a much bigger deal when I was a kid. There were parades and memorials and ceremonies. And now, in 2008, with U.S. troops fighting overseas in two wars, it’s being treated as just another day.

I wonder, is it because no one has time to reflect on the sacrifices of our armed services anymore? Or, is it because we’ve been so inundated with news of death and destruction in Afghanistan and Iraq, we’ve reached a saturation point?

1 thought on “A day to give Thanks”