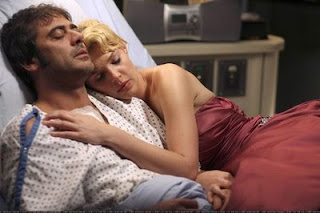 I’ve been a fan of the show Grey’s Anatomy since Season 1. One of the most poignant, romantic love stories depicted on the show was of Izzie & Denny. Their relationship was doomed from the start: Denny was dying of an ailment that required a heart transplant, and he wasn’t high enough on the list to receive one before time ran out. So, Izzie devised a desperate plan to save him: she cut his LVAD wire to make his situation so dire, he HAD to bumped up on the list.

And he was. He received his transplant, but the writers of the top-rated drama pulled the rug out from under the viewers and killed him off anyway. We were left to endure several seasons of Izzie pining away for Denny, crippled by her grief and saddled with the consequences of her actions.

Finally, it looked as though they were going to let her move on this season. She is once again in a relationship with Alex, and things appeared to headed in a good direction for them. Then, comes this latest storyline for Izzie, where Denny has come back from the dead. He’s been following her around the hospital, hanging out in her bedroom, and yes, even having sex with her while her confused roommates stand outside the door listening to Izzie’s moans of rapture.

Grey’s creator Shonda Rimes is really stretching the believability on this one.

One theory that has been suggested is that Izzie is suffering from a brain tumor, and that her visions of Denny are all an elaborate hallucination. But, Shonda Rimes recently shot that one down in an interview with Entertainment Weekly.

I’ve giving this one a lot of thought, and there are aspects of this storyline that remind me of my own novel. (Not TOO similar, thank goodness.) I think I may have a viable theory about what’s REALLY going on with Izzie Stevens.

I think she sees dead people.

The biggest hurdle that Izzie has had to overcome throughout the show is that she gets way too emotionally involved with her patients. She empathizes with them so much, that she often crosses the line and gets caught up in their personal problems, inserting herself into the situation with their families in a way that borders on unprofessionalism. I’ve often wondered why they make her character so prone to this type of behavior.

Then it hit me: maybe she’s got some sort of psychic ability. Maybe Izzie has a gift for relating to people because she can pick up on their emotions and feel what they’re feeling–so acutely, that it influences her own behavior.

So….what if Denny really is dead, and HE is the one that is having trouble moving on? Now that she’s in a clearer state of mind for herself, she can see his suffering for the first time. Perhaps her mission is to try and help him move on, and getting overly involved in that process (to the point of being able to see, hear, and touch him) is just par for the course with her.

All things supernatural are very popular right now: Harry Potter, Twilight, Medium, The Ghost Whisperer, Heroes, LOST, etc. It looks to me like Shonda Rimes has decided to take that leap of faith and put Grey’s Anatomy on the mystical bandwagon.

Just think of the plot possibilities: Meredith’s mother can come back and communicate to Meredith thru Izzie. Patients who have died can come back with messages that will help the doctors save other patients who are still alive.

Could be very interesting, if handled well.

That’s my theory. I’m curious to see how it plays out!