Over the next few days, I’ll be blogging about my recent cruise to Bermuda. Rather than write one big long review, I think it’s better to break it down into manageable topics, such as Shopping, Excursions, Entertainment, Overall Ship Review, etc.

When we docked in Bermuda, our first order of business was to do a little shopping, before heading to the beach. We got off the ship and decided to take the ferry into Hamilton, because it’s faster than the bus and more fun. NOTE: The ferry runs promptly every half hour in the morning, but then switches to once an hour as the day goes on, so it’s better to go early. My in-laws just missed the 10am ferry and got stuck waiting for the next one. We managed to time it better, and just made the 10:30 ferry. If, like us, you’re cutting it close, and the line for tickets near the ship is really long, just start walking over to the ferry loading area and buy your tickets there from the ticket agent on the dock. There’s also a TLC Trolley that can drive you over to the buses and ferry area, but it ran infrequently, so walking ended up being the faster option, even with the kids in tow. It only took us a couple of minutes, and if you look down into the water, you can see a nice variety of beautiful fish (including the big rainbow parrot fish—our favorite).

Once you get to Hamilton, start walking to the right to get to the shops. We went left, and trust me, there was nothing much there to see, so we had to double back.

There were lots of clothing stores and art galleries, but we had no interest in those. After a few minutes, we found ourselves at Riihiluoma’s Flying Colours, 5 Queen Street, Hamilton Bermuda www.FlyingColours.bm 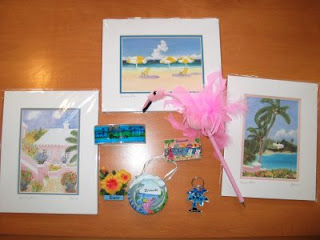 An assortment of fun souvenirs, including a silly Flamingo pen

We purchased a good chunk of our souvenirs from this shop. The prices in this store were the lowest, compared to any of the others, including the dockyard shops. It’s got all the typical “touristy” items—most of them made in China—but if you go upstairs to the top level, you’ll find all of the sale merchandise, along with some locally made items. We got the obligatory magnets here (something we collect from every place we visit), a dolphin Christmas ornament, and a bunch of sale-priced t-shirts. My daughters picked up a couple of other odds and ends, including a mug and a keychain. I purchased some beautiful pictures of Bermuda (one is for my Mom) and found a kitschy Flamingo pen for my sister, Maria. (It’s our “thing”: we try to buy each other the most gaudy or strange souvenir we possibly can whenever we travel. This was perfect.) The store was a nice “one-stop shopping” shop, so after that we headed for the B7 bus to Horseshoe Bay Beach.

The Clocktower Mall is walking distance from the dockyard, so on our second day (after snorkeling) we shopped there for a couple of hours. We peeked in at the Glassworks factory on the way, but the prices were ridiculous. A simple ceramic mug was $35. We didn’t stay there long.

The Mall itself had a variety of stores, but some of them were too “high-end” for me. There was a jewelry store and a perfume store and a bookstore, in addition to a Haagen-Daaz ice cream shop. There was a sundries shop where we purchased some new sunglasses to replace the ones that the girls lost in the ocean the day before. They also had drinks, snacks, and toiletry items. 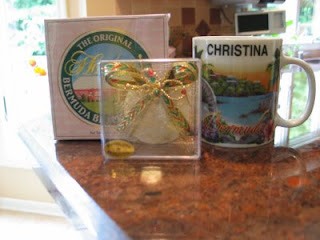 Rum cake, a sand dollar ornament, and a Bermuda mug

I found some nice things in A.S. Cooper, including a Bermuda Rum Cake and a locally-made Christmas ornament. The prices here were almost as good as in the store in Hamilton (they have a location there on Front Street as well), and lower than the other souvenir-type shops at the Clocktower Mall. I picked up a bottle of the infamous “Outerbridge’s Sherry Pepper Sauce” for my brother-in-law. I took one whiff of it and it melted the hairs in my nose. I can’t imagine actually ingesting the stuff, but Angelo was excited to try it. My daughter bought a pink house votive candle holder that was adorable. You can see many of their items on their website: www.coopersbermuda.com They take all major credit cards, and they don’t charge sales tax. 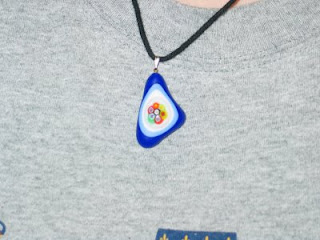 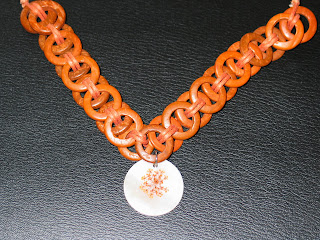 A flower necklace, made in Bermuda

Another store that I consider a must-visit is the Enchanted Grand Bazaar. They have a wealth of items that are made in Bermuda, including beautiful ceramics and jewelry. My daughters bought locally-made glass pendants, and I couldn’t resist a gorgeous wooden pencil holder for my desk. It had mother-of-pearl inlays, and even though it was made in Egypt, not Bermuda (although, it was considered an “exclusive” to that shop), I had to have it. We also purchased some locally-made necklaces with real flower pendants. Very pretty! The store offers volume discounts (e.g. Buy 3 or more ceramics and you get 10% off), so bring a friend along and pool your purchases. 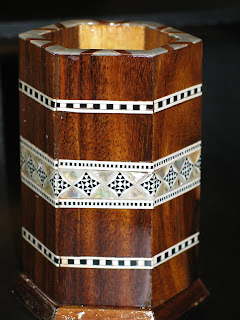 There are several places to eat at the Dockyard, but the kids were getting tired so we didn’t have an opportunity to try them. The Frog & Onion Pub is recommended by Royal Caribbean, and the guy who ran our snorkeling excursions raved about the Freeport Seafood Restaurant. He said that if you go there, you have to have the Wahoo Fish Sandwich with English Chips. **NOTE FOR INTERNET ADDICTS** The Freeport restaurant also has a Cyber Café where you can surf the web if you need a fix.

We did a little bit of shopping onboard the Explorer of the Seas, but not much. The prices were, as expected, high. The one thing I just had to get was the Christmas ornament that looks like a miniature replica of the ship. We purchased one of the Celebrity Millennium back in February, so we thought it would be fun to get a Royal Caribbean ship, too. **WARNING** These ship ornaments are VERY delicate, and chip quite easily. So many of the ornaments on display had little nicks and chips in them, it took me a long time to find one that was perfect. I went to the register to pay, and the cashier wrapped it loosely in a plastic bag because she had no tissue paper or bubble wrap. Sure enough, when I went to show it my family, the ornament slipped right out of the plastic and got a chip in it. I took it back to the store, and there was a different cashier there. She reached behind the counter to a box that was filled with the same ornaments, only they were encased in a protective plastic shell. “Here,” she said, “take one of these instead.” So, if you’re looking to get one of those ornaments, DO NOT buy the ones on display—go to the register and ask for one that’s still in the plastic. 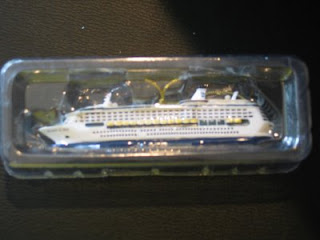 There were some nice sales towards the end of the voyage, when the shops offered handbags for only $10, discounted logo t-shirts, and 50% off many of the costume jewelry pieces. If you’re looking for bargains on board, wait until the last At Sea day to do your shopping.