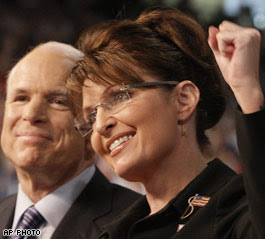 I can’t understand this choice. Sure, party loyalists/Republican conservatives will be happy, and McCain’s choice is certainly historic, but I don’t think it does him any favors with the voters he needs to beat Barack Obama. If anything, I think this choice makes Obama MORE palatable (can you imagine?) to those of us who were most concerned about his lack of experience. With 4 years as a United States Senator and another 7 in the Illinois Senate, he looks like a grizzled veteran next to Palin.

As a woman, adding Palin to the ticket does not make me want to vote for McCain. Given McCain’s age and prior health record, it’s a sad reality that his VP pick needs to be held to a high level of scrutiny. How can I possibly vote to put someone in a position that is a heartbeat away from the Presidency, when she only has 2 years’ of experience? With tensions escalating in Georgia (Russia has said they blame the United States for orchestrating the entire situation), our troops in Afghanistan dying in record numbers, and the Iraq War still raging, we need someone who knows what the heck they’re doing when it comes to foreign policy.

The President doesn’t make those kinds of policy decisions alone, and while he doesn’t have lots of experience, Obama has proven that he can surround himself with good people. McCain picked Palin as his right-hand after meeting with her ONCE. He’s done nothing but reinforce his reputation as an impulsive person.

I think that Palin will get lots of press in the next two weeks, as people try to figure out who the heck she is. Perhaps there’ll even be a honeymoon period where she’ll enjoy the spotlight and McCain will see a bounce in his polling numbers. But, in the end, I’m betting that folks will be turned off by McCain’s pick, and will put Obama and Biden in the White House come November.