Yesterday morning, a friend posted a link to an article whose title intrigued me: You May Have Worn the Prom Dress, But I Get to Wear the Wedding Dress.

Of course, I had to click through and read this anticipated train wreck. I was not disappointed.

What struck me most at first is the author’s total lack of self-awareness, which resulted in my posting the following tweet: 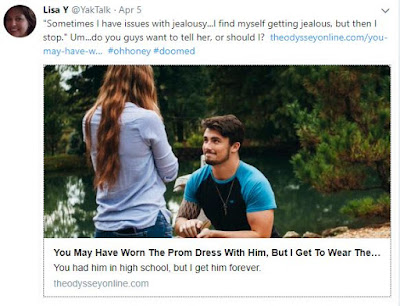 Within a couple of hours, my tweets were included in Twitter Moments, and the notifications just exploded from there.  I thought, wow, so this what it’s like to go viral?  Pretty cool.

But as I watched the number of Likes quickly climb into the thousands, racking up replies that were even snarkier and harsher than mine, I found myself feeling badly for the author of the original article. As a writer who has also had personal essays published, I have an appreciation for how scary it can be to put yourself out there and release your innermost thoughts to the world.  I’ve been a freelance writer for over 30 years, and there are still some things that I’m not ready to publish for public consumption, and probably never will.

I decided to dig a little deeper into what makes this girl tick.

The author, Victoria Higgins, is a young college student who has penned similarly earnest missives in the past, most notably: A Thank You to the Girls Who Didn’t Love Him Right, A Thank You to My Future In-Laws, For Giving Me My Person, and To Those Who Think I Am Too Young for Marriage (hey, thanks for the shout out).

Even just a cursory scan of Victoria’s other essays revealed a painful level of insecurity beneath that “He’s MINE MINE MINE and he’s in good hands now!” bravado. As a mother of three daughters ranging in age from 17 to 23, I started to feel truly sorry for this girl, who is now experiencing the harsh side of baring your soul on the internet–a public flogging that I contributed to.

I began reading her other essays, searching for an explanation as to the root cause of her insecurities, and I found what I was looking for in this one: Why I Will Tell My Children to Wait Until Marriage.

In this essay, the author reveals that she was raised in the Bible Belt, and describes herself as “an avid church goer.”  She talks about how abstinence has fallen out of vogue in our society, and the reasons why–now that she’s met her one true love–it needs to make a comeback (bold type added by me):

Neither of us waited until marriage, and neither of us thought of each other. We didn’t know each other until we started dating, but we didn’t think of the one that we would one day marry. I never knew how someone’s past could devastate me. I struggle daily with insecurities and comparisons to the girls he has been with. I don’t want to, but I can’t help it. I know that he feels the same way about my past. It causes distrust in a society where distrust is already easy enough to have. I never wanted to be that girl that compared myself to others, but it’s hard not to think about the other girls and if they were better or if he still thinks about them.

Ugh.  I had a feeling we would end up at this place. Repressive attitudes towards sex are so damaging to both men and women, and this is a prime example. Sexual intimacy should not be rushed, and yes, it IS a big step in a relationship. But this girl has been taught that sex is SO special, such a unique and wonderful gift, that if you’ve squandered it on someone you don’t end up spending the rest of your life with, you have done that love a horrible disservice.

It reminds me of the Duggar Family, and the issues they’ve had with their eldest son, Josh. Despite the fact that his parents, Jim Bob and Michelle, held hands, kissed, and did Lord knows what else while they were dating, they decided to raise their 19 children with a bunch of “do as I say, not as I do” courtship rules. Their children have been subjected to chaperoned dates, no hand holding until they’re engaged, and saving their first kiss for marriage. Josh Duggar even sang a “loyalty song” to his bride, Anna, on their wedding day in 2008. Just 7 years later, it was discovered that Josh had molested several underage girls when he was 14–including his own siblings–followed quickly by his confessions of infidelity and an addiction to pornography. Don’t pass along those kinds of sexual hang-ups to your own children.  No good can come from that.

I’m not saying that sexual intimacy isn’t special. Of course it is. But by over-emphasizing the significance of “saving it for that one perfect someone” you are creating the type of massive regret and insecurity that is seeping into nearly every essay this poor girl is writing.  Instead of just enjoying the relationship she and her fiance’ have now, living in the present, and looking ahead to their future, she cannot help but think about all of the women that came before her–and she can’t help wondering if HE is still thinking about them, too.

Here’s the thing I would like to tell her, the advice that I give my own daughters about love and relationships: every single person you have ever met, loved, dated, and eventually left behind, has shaped who you are as a person.  If your fiance’ truly loves you, just as you are, then he should be accepting of every ex-boyfriend, every unrequited crush, every guy you’ve ever had any kind of friendship with before he met you–not because they ended up hurting you or treating you in a way you didn’t deserve, but because all of those interactions–the good and the bad–have made you the woman that he loves.

Victoria, you need to get to the same place.  You need to accept the fact that, in the past, there were other women who made “your man” happy–yes, TRULY happy.  It wasn’t that they “didn’t love him right.” They did–and if you allow yourself to admit that, it doesn’t make the relationship that you have with him now any less real and right. They made him happy, and now, you make him happy.  It’s okay.  You don’t need to “thank” them, but you also don’t need to indulge in revisionist history, downgrading his past relationships the way a grocer marks down bruised produce.

Life is short, Victoria.  If you truly love someone, you would never begrudge them a single moment of joy, even if that moment came as a result of another woman’s love, at a time when the two of you were not together.

Get over it, honey. Live in the present, and let the past go.