Yes, friends, it’s that time again….time to take a bullet in the name of “research” and taste test the two newest “Limited Edition” flavors of Oreo cookies. 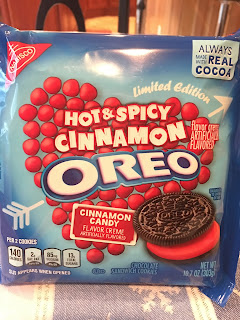 I’ll admit, I was not looking forward to trying these when I first heard about them. They’re supposedly infused with the flavor of cinnamon red hot candies, something I have not eaten in many years. (And even then, it was as part of a “special recipe” handed down by my cousin’s husband, “Pineapple Red Hots”: a side dish meant to go with ham and/or turkey, and it’s actually not bad–a sentimental favorite, because it came from Jimmy’s mom, and she was an amazing lady. Genius Kitchen has a recipe HERE, if you’re curious.)

First impressions on this one: disappointing. 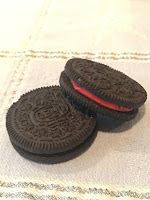 The cookie itself is off-putting. There’s a faint scent of fake cinnamon when you open the package, but not nearly as strong as I expected. (There’s a huge difference between “fake cinnamon” flavor and real cinnamon.  This cookie doesn’t even attempt to imitate real cinnamon–the filling is supposed to taste like the artificial “red hot” version of cinnamon, so that’s the standard to which I’m holding these.)  The color is also an eerie, saturated shade of Devil Red.

The cinnamon red hot flavoring is almost non-existent, and the chocolate sandwich cookie totally overwhelms it.  I tried eating just the filling, and still, you can barely taste the red hot flavoring. You can smell it–faintly–but there’s zero tingle on your taste buds….absolutely nothing like having red hot candies. Bummer. 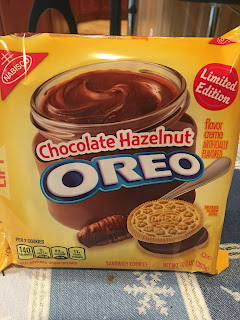 Next was the Chocolate Hazelnut Oreos, and my expectations were high from the moment I saw the packaging.

This cookie definitely comes closer to duplicating the flavoring of Nutella, the commonly-known chocolate hazelnut spread from Italy that this cookie clearly seeks to imitate.  What’s interesting is that the filling in this cookie is thicker and more substantial than actual Nutella spread–it has the consistency of a hazelnut fudge or ganache, and I tell you what–I think I like it even better than Nutella (I know, that’s treasonous, but I have to be honest here. The filling is A++)

The only downside is that the vanilla sandwich cookie gets lost in the equation—totally overpowered by the Chocolate Hazelnut filling–but this is not necessarily a bad thing, particularly if you’re a chocoholic. In fact, I would nominate this cookie “Most Likely to Eat Only the Filling and Put the Cookie Part Back in the Package.”  Note to Nabisco: you might want to consider selling this filling on its own, or turning this into a candy bar version. 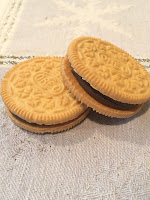 I found these at my local ShopRite, and would definitely purchase them again.