Gnocchi has long been one of my favorite types of pasta, but I was always too intimidated to try making it myself at home. After 3 attempts, I can say that it’s actually one of the easier types of pastat to make from scratch, and I’ve finally managed to perfect it to the point where I’m willing to post about it. 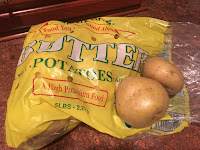 First things first: the potatoes.  You need to make sure you use the right kind: light, thin-skinned butter potatoes.  Yes, it makes it a difference, especially if you want to get the texture just right.

The first time I made gnocchi, I was careful to use these type of potatoes, but they were still gummy and lacked flavor.  I realized afterwards that I had made several key mistakes:
1) I didn’t use a potato ricer, and mashing the potatoes just wasn’t the same.
2) I didn’t add an egg (which the recipe said was “optional”…trust me, it’s not)
3) I followed the recipe too closely, and used too much flour. 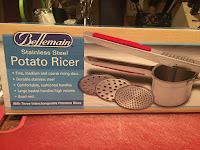 So, after being forced to eat the not-so-great first-attempt at gnocchi, my husband surprised me for Christmas by buying me a ricer.   He looked at the reviews on Amazon and ended up purchasing this one by Bellemain.  It had great ratings, and was only $18.95.  Well worth it!

I used the disc with the most holes in it, which produces the finest potato rice. It’s important to make sure the potatoes are cooked fully, so that they’re soft enough to go through the press easily. If you can get a knife through them without much resistance, they’re done.

The gnocchi recipe itself is one from the legendary Italian chef and cookbook author Marcella Hazan.  In my last two attempts, the gnocchi came out perfectly, and here’s the ratio that worked for me:

Most pasta recipes tell you to mix everything right on your cutting board, but this one works best using a mixing bowl, and it helps to keep everything contained and keeps the mess to a minimum.  After cooking the potatoes until tender, I plunged them into cold water to loosen the skins, then peeled them with a paring knife while the potatoes were still warm.

The Bellemain ricer is fantastic. I really thought it would be a struggle–I didn’t think I’d have enough leverage to squeeze the potatoes through–but the gadget is very well designed, and it worked like a charm.  After ricing the potatoes–which were still warm, but not hot–into a bowl, I dropped in a lightly beaten egg and blended it all with a fork.  Then I added in 1 cup of flour, and used my hands to mix it all together, like you would meatballs. Using your hands is definitely the way to go–it allows you to feel the texture of the gnocchi dough, getting everything smooth and well incorporated.  The dough will be soft and still a little warm, but not sticky. If it is sticky, add just a tiny bit more flour–you can always add more while you’re rolling it on the cutting board. 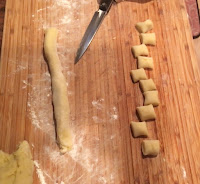 I sprinkled a little bit of flour onto the cutting board, and took half the dough out of the bowl. Then I set half of that to one side, and started rolling 1/4 of the dough into a thin “snake” about an inch thick. Once it’s rolled out, I used a knife to cut the roll into little pillows. NOTE: Most recipes call for you to roll the gnocchi across a fork to give them ridges, so that they cook more evenly.  I tried–it was not good.  So you know what? I skipped that step, and they cooked up just fine. Pillows it is!

After repeating the process with the rest of the dough, I put a big 6 quart pot of salted water on to boil, set the gnocchi aside, and start to work on the vodka sauce. 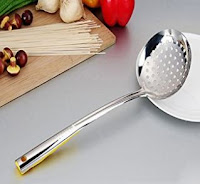 Honestly, this is one of the easiest sauces to make–it’s a recipe that I followed exactly as written, from the Pioneer Woman, and it turns out perfectly every single time.  You can get the recipe HERE on her website (where she pairs it with penne).  Gnocchi also work well with a Bolognese Sauce or a Gorgonzola cream sauce.

Once the vodka sauce is done, and the salted water is boiling, everything comes together pretty quickly.  I cook the gnocchi in three batches, dropping them into the salted water using a metal skimmer ladle like the one pictured at right (available HERE on Amazon). You could also use a slotted spoon, but I found the skimmer the best and fastest way to get them out of the water quickly so that they don’t overcook. 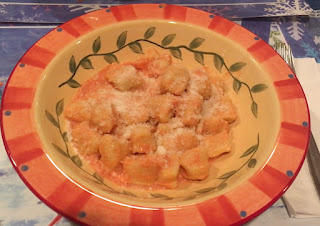 As soon as the gnocchi all start floating to the top, they’re ready–for my third attempt, I dropped them into a strainer first to shake off the excess water, and then into a bowl with a little of the vodka sauce at the bottom, and that seemed to make the texture even better. Do this until all of gnocchi is cooked, then toss gently with some vodka sauce (you’ll have plenty of sauce leftover, since the Pioneer Woman recipe makes quite a bit, but that’s okay–it keeps and reheats well).  Sprinkle the top with some grated Parmesan cheese, and you’re all set. A sprinkle of finely chopped parsley would have added a nice pop of color and freshness, but I was too lazy to do that tonight before I snapped this photo. It was, nevertheless, absolutely delicious, and well worth the effort of making everything from scratch.  Buon Appetito e Mangia Bene!