Tonight I had the pleasure of meeting Ree Drummond, the Food Network star and food blogger more commonly known as The Pioneer Woman. Her new cookbook, Come and Get It, debuts tomorrow, but she had a book signing tonight in New Jersey that I was privileged to attend.

I have several of her cookbooks, but this new one just might be my favorite. 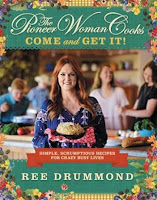 Not only is the book filled with recipes that sound amazing–Lobster Mac N Cheese, Roasted Garlic Pull-Apart Bread, Edna Mae’s Escalloped Cabbage–it includes tips on stocking up so that you can whip up these dishes with ingredients you already have on hand. The book includes helpful lists such as: 20 Favorite Pantry Items, 12 Freezer Staples, 15 Fridge Staples, and Ree’s 12 Favorite Cuts of Beef (with descriptions for each).  This edition also had an Added Bonus Section with additional recipes just for Barnes and Noble customers, including Jalapeno Scones and Slow Cooker Ancho Chili Brisket, Mexican Macaroni Salad, and Ladd’s Favorite Chocolate Pie. 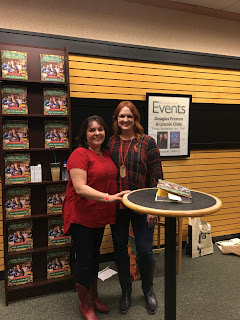 The best thing about tonight was seeing just how warm and genuine Ree is in person–she is exactly the same as she appears to be on television.  I loved meeting her, and had a great time hanging out with other PW fans while we waited for Ree to arrive.

I wore my red cowboy boots (on purpose, of course) and when Ree saw them, she said, “Hey, we’re
boot sisters!”  I’d like to take this literally, and consider it an invitation to Thanksgiving dinner, so hopefully things won’t be too awkward when I show up in Pawhuska next month.  (I hope she seats me next to Ladd’s dad, Pa-Pa.)

Below is a video that I took at the signing. We were told multiple times that this was a signing only, and that there would be no talk or interaction beforehand.  Of course, Ree had other ideas, and started off by taking questions from her fans, which shows what a down-to-earth, friendly person she is. Apologies for the delay at the beginning: they said she would be right out, but there was a bit of a wait before she actually emerged.

She was worth the wait!  Such a pleasure–I’m an even bigger fan now that I met her, and I can’t wait to make the recipes in this latest book.