My youngest daughter has her Junior Prom coming up, and tonight, a friend surprised her with a “promposal”, asking her to go as his date. 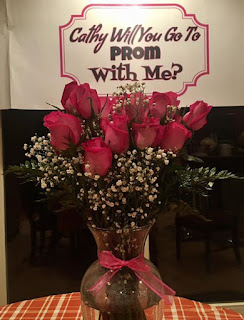 This is something new for us. Although I’ve certainly heard of “promposals”–creative, sometimes elaborate ways of asking someone to attend the prom, usually involving posterboard and a cheesy poem spelled out with candy wrappers–we’d never actually experienced one first-hand.  My older two daughters went to a high school that was girls-only, so the negotiation process for prom dates was handled almost exclusively by the girls themselves, usually during lunch period in the cafeteria. (“Hey, you can take my brother if I can take your cousin. And my brother’s friend is available but then he needs someone to go to his prom two weeks later. Sounds good. Done deal. Who wants ice cream?”)

Not so for my youngest, who attends a co-ed public school.  The boy who asked her is “just a friend,” but seeing as he had a custom banner made for the occasion and threw in two dozen roses for good measure, I’d say at this point that he’s elevated his status to a “good friend.” We’ll have to stay tuned on that one.

In the meantime, my daughter was very pleased by his thoughtfulness, and although there were other things going on in the world today that got far more airplay, this was certainly the highlight of OUR day.