Skip to content
The first time I tried Limoncello, it was in Sorrento, Italy–a place known for its spectacular lemons, and the high-alcohol liquor made from them. Last year, I found a recipe for it on a friend’s Facebook page, “Right Dish,” and was excited to make it for the holidays….until I read the recipe and discovered that it takes 90 days to make from start to finish.  Oh well, I said, there’s always next year! 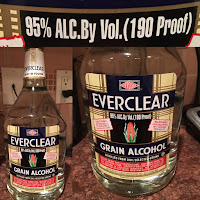 And yes, I actually marked my calendar for October this year, and printed out the recipe about 100 days ahead of time.   The first item on the list was something called, “Everclear”, which I had never heard of before.  I know, there are college kids and Jell-O shot enthusiasts reading this thinking that I must have grown up living under a rock.  Sorry–I never got into the whole binge-drinking thing.   For those who haven’t partaken of this particular libation, it is almost pure grain alcohol, and comes in two strengths: 70% alcohol, and 95% alcohol.   Good lord….this is the kind of thing that can melt your internal organs or peel the paint off of a car.  Who drinks this stuff?
Oh, wait….I guess the answer is, “Me.”  Because it is the primary ingredient for making Limoncello. I went to my local liquor store, and he only had the 95% alcohol version, so that’s what we brought home. The recipe calls for two 750ml bottles of Everclear.

The next ingredient is the zest of 20 organic lemons.   Let me tell you, if you’ve ever wondered what carpal tunnel syndrome feels like, go ahead and start zesting almost 2 dozen lemons in one sitting.

[EDITED TO ADD: Since you’re only using the zest, you end up with 20 naked lemons, which translates into a whole bunch of fresh lemon juice that would be a shame to go to waste.  CLICK HERE for my solution: Homemade Lemon Sorbet.] 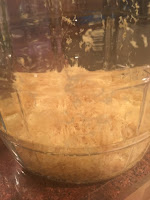 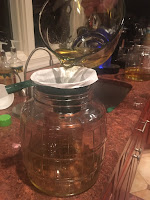 Next, you put the zest into a large glass container, and–only AFTER filtering the Everclear through a coffee filter several times to make it less taste less like jet fuel–you pour the strained grain alcohol into the container and give it a quick swirl.  (RightDish recommends using a gold coffee filter but I didn’t have one–I eventually made do with a  fine mesh strainer for the next round of filtering). Then put on the lid and store it in a cool, dark place for 45 days. 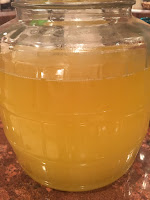 I kept it on a shelf in my clothes closet. Every once in a while I gave the jar a little swirl, and watched the happy little bits of lemon zest swirl around in the Everclear like an alcoholic’s most sought-after snowglobe.  Good times. 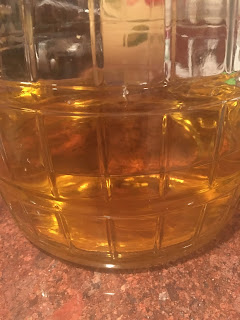 Once 45 days have passed, it’s time to strain out the lemon zest, and then strain the limoncello-in-progress through the strainer 4 more times. Even after the straining process, it became apparent that the term “everclear” no longer applied–I tried to tell myself the neon yellow lemon-infused liquor looked cool, but that little voice in the back of my mind kept chiming in: 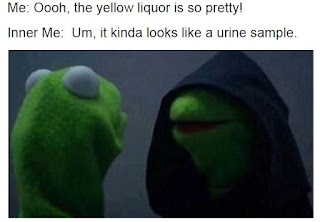 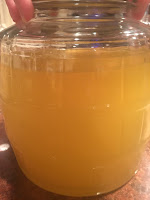 C’mon, admit it, you were thinking it, too.

The next step is to make a Simple Sugar Syrup, consisting of 4 cups of white sugar and 6 cups of water.  You stir the two together in a pot and then just leave it alone until it comes to a boil.  Let it boil for 5 minutes, then cool completely before adding it to the jar of strained liquor.  As soon as you stir in the cooled syrup, you start to see the color of the finished product shaping up.

All it needs now is time–another 45 days, to be exact, in the same cool, dark place you kept it before.  Right Dish recommends straining it one last time, and then bottling it up and keeping it in the freezer until you’re ready to serve it.

For those who’ve never tried Limoncello, fair warning: it is STRONG stuff.  Typically, it goes like this:

First sip:  OH MY LORD this stuff is NASTY although it kinda tastes like lemon but WHOA.

Second sip:  You know, the lemon note is actually really nice and refreshing, but wow, you really do need to sip this stuff slowly, right?

Third sip: This limoncello is SO good!  You can taste the lemon even through the liquor so it’s sort of like drinking lemonade only stronger, ha ha ha, I mean a LOT stronger, but still….

Fourth sip:  Wow do I love this stuff. You have pretty eyes. I want a unicorn for Christmas. What day is it??

Yes, I would not advise having more than three sips of this if you want to stay lucid and coherent. And please, do NOT overindulge on this stuff. When I posted on social media that I was making limoncello from scratch, I was inundated with horror stories from friends who, thankfully, lived to tell the tale of drinking too much of the stuff–but just barely.

It definitely tastes best when it’s been in the freezer for at least a couple of hours, because it gets thicker and the coldness helps take the edge off of the burning from the high alcohol content.

Here’s my finished batch, all bottled up and ready for gift-giving: 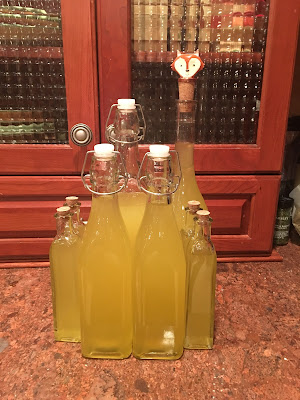