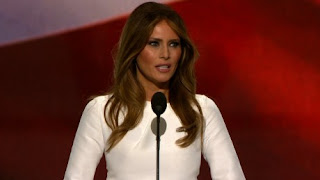 Last night, Melania Trump gave what was lauded as a rousing, heartfelt speech at the Republican National Convention, praising her patriotic husband Donald while recounting her own path to becoming a proud, flag-waving American citizen.

The only trouble is, some of her words sounded awfully familiar, and it wasn’t long before people realized that several portions of her speech appeared to be “liberally borrowed” from the rousing, heartfelt speech that Michelle Obama gave in 2008.

For a Media Studies junkie like me, who has also written a decent number of political campaign speeches and worked on election campaigns, I love seeing what happens next in instances like these. THIS is the kind of debacle that really shows what your consultants are worth.

Let’s get one thing out of the way first: despite her assertions, there is NO WAY Melania Trump wrote that speech on her own.  She’s claiming she had “a little help.”  Um….no.

Anyone who listened to her deliver the speech in her heavily-accented English, tripping over the words in several places, struggling to pronounce many of them clearly. knows that most of this speech was written FOR her, not BY her.  One of the trickiest things I encounter when writing a speech for someone else–particularly those in the political realm–is to make them sound as though they have a great way with words, while still making them sound like themselves.  The challenge: if they were that great with words, they wouldn’t need me.  It’s not easy, but it can be done–unfortunately, it takes some experience to pull it off, and by all accounts, most of the people Donald Trump has chosen to surround himself with haven’t spent much time in the political arena. The same trait that makes him attractive to so many people as a “Washington outsider” practically guarantees that this kind of screw-up is bound to happen during the campaign.

Here’s how I suspect it all went down: Donald assigned one of his many inexperienced hacks to help his beautiful wife make a pretty speech.  The misguided (probably under 30) political consultant who was in over his or her head immediately started using search engines for “Great Speeches by Candidates’ Wives at National Conventions” (because that’s what researchers who have no idea how to survive in a world without Google do) and came across Michelle Obama’s words from 2008.   Helpful notes were jotted down that were meant to “inspire” Melania, and the little Missus ended up lifting the suggested paragraphs almost word-for-word. 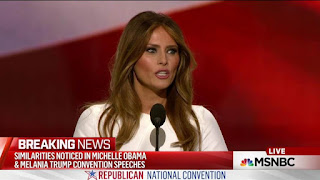 According to this article in Politico, the spin coming out of Trump’s campaign confirms this: In writing her beautiful speech, Melania’s team of writers took notes on her life’s inspirations, and in some instances included fragments that reflected her own thinking,” according to Senior Communications Advisor Jason Miller.

Well, there you go.  Guess what guys? That still doesn’t make it okay.

Besides the fact that her “team of writers” (and I use the term “writers” with the utmost sarcasm) needs to be shown the door, if the Trump campaign really wants to fix this mess, their next step is to have Melania herself make a statement–one that is written plainly and directly so that it sounds like she actually said it herself.  And in that statement, Melania should say something along the lines of “The similarities in my speech reflect the fact that the feelings and ideas and values that I was raised with are truly Universal. No matter what your background or political affiliation, Democrat or Republican, the concept of keeping your word and working hard to achieve your dreams is one that speaks to all people. I am proud to be an American and proud to support my husband, who will bring these values back and make this nation great again.”

A statement like the one I’ve suggested accomplishes several things: it allows Melania to stand up and speak for herself, rather than have a campaign flack do it; it provides an opportunity to reach out to Democrats and appear inclusive; it shields the embattled Melania in the cloak of patriotism and citizenship; and it brings it all back to the entire purpose of having her give a speech in the first place: to build up her husband’s image and get him elected.

You’re welcome, Trump campaign. (FYI: now would be a good time to take some notes.)