Skip to content
I’ve been anxiously awaiting the debut of the newest round of Ben & Jerry’s “core” ice cream flavors, and today, I found three of them at the grocery store: Coconuts for Caramel, Cookies & Cream Cheesecake Core, and Brownie Batter Core. 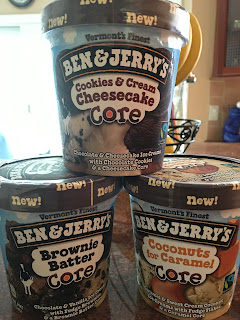 I confess, I’m not a big ice cream fanatic, especially when it’s cold outside (Spring, why has thou forsaken the Northeast?), but I’ve been wanting to try these for a long time, and I had a great coupon from ShopRite (buy 4 pints, get $1.50 off) so I picked up a pint of each for a quick taste test (and a pint of The Tonight Dough, just because). 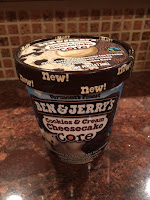 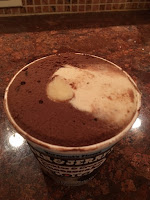 First impressions: The cheesecake core was frozen solid, and looked almost like someone stuck a mozzarella stick into the center of the pint. Yikes. The cookie pieces were large, though.

Taste test: I soooo wanted this one to be good, and it just…wasn’t. The chocolate ice cream was perfectly fine, as you’d expect, but the cheesecake ice cream didn’t taste like cheesecake, or any other discernible flavor–it was like vanilla ice cream minus the vanilla flavoring. Odd. And the cheesecake core? Meh. Again, not much in the way of cheesecake flavor. The cookie pieces in the ice cream were the saving grace for this one: they’re more like mini-brownie bites than cookies, with a rich, dense chocolate cake texture that was wonderfully decadent.

As a combo, the two ice creams do compliment one another, but overall, this one was nothing special.

Next up: Brownie Batter 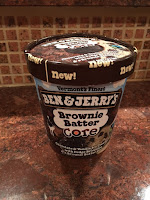 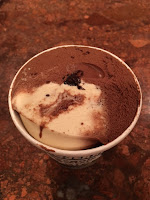 First impressions: At first, it looked like there was barely any “core” to be had, but once I dug into it with my ice cream scoop, it revealed a velvety-smooth ribbon of chocolate at the center, more the consistency of hot fudge sauce than brownie batter.

Taste test: I expected this to be a fairly straightforward, standard dessert offering, and that’s about the best way to describe it: basically a fudge sundae pre-made in one container.  The brownie bits were suprisingly smaller and less brownie-like than the cookie bits in the Cheesecake Core flavor, and the consistency of the “batter” was much smoother than I thought it would be. The core reminded me of Bosco chocolate syrup far more than batter. There’s absolutely nothing wrong with this flavor, but it’s not exactly revolutionary: the vanilla ice cream tastes like it’s supposed to, the chocolate tastes like chocolate. There’s syrup mixed in. Yawn.  If anything, it felt like it was missing the cherry on top. I think this could have been a home run, if they’d made the Brownie core a bit thicker and more textured, but they played it a little too safe.

And finally: Coconuts for Caramel. 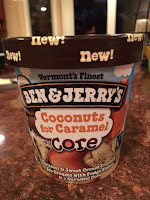 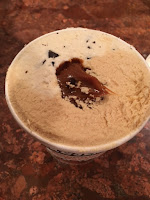 First impressions: Oh my–as soon as I opened the container, and saw the thick, buttery caramel core sticking to the roof of the container, I was in love. The only thing I love more than a little caramel is a LOT of caramel.

Taste test: This is the one I was most excited to try, and it did not disappoint. The coconut ice cream has a ridiculous amount of coconut flakes in it. I happen to love coconut, so there’s no such thing as “too much”of it, but I could see where someone who is less coconut-obsessed might find it a tad overdone.  To which I say: good, don’t buy this, so there’s more for me!  The caramel ice cream also had a pleasing caramel flavor without being overpowering, and the caramel core was gooey, buttery perfection.

Verdict:  A Coconut Lover’s Dream. Seriously, I want to buy a case of this stuff. DELICIOUS!
.