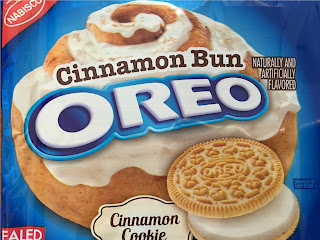 I hope you realize just how dedicated I am to trying out these new flavors: I braved the pre-snowstorm apocalypse crowd at ShopRite just to pick up a package of these and review them for the blog.
It turns out, what they should have been stocking up on were these new Oreos. They’re pretty good!
I’ve said sometimes complained that an Oreo with anything other than a chocolate-based cookie is not really, truly an Oreo, and that the rest are just “homage” cookies that liberally borrow the Oreo format while utilizing completely different flavor profiles. But, as I’ve started reviewing the new flavors, I do find that there are times when a vanilla-flavored cookie is absolutely necessary to achieve the right balance of flavor. This is one of those times.

When it comes to the “Limited edition” flavors from Nabisco, I confess, I’ve become a little obsessed, to the point where I get multiple tags on Facebook whenever a new one is annoucned. Some of the Limited Edition flavors have been disappointing (Brownie Batter, I’m looking at you), while others have been triumphs (Hello, Toasted Coconut, how I miss you so!).  The Cinnamon Bun ones are definitely in the “winning” category. 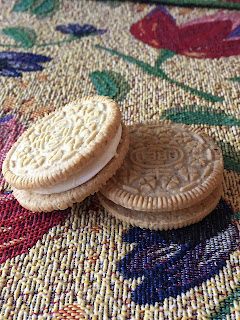 The cookie itself is vanilla with just a hint of cinnamon in it–very subtle.  I almost couldn’t taste the cinnamon at all in the first cookie I ate, but by the second one, the flavor started to come through.

The true star of this cookie is the cream, though: it’s a smoother consistency than the usual Oreo cream, and tastes very much like the creamy icing you find atop a cinnamon roll. There are hints of cinnamon in the cream, too–I just wish the ratio of cream to cookie were a little higher in this one.

Overall, though: DELICIOUS!  These are worth a try if you’re a cookie fan and want to explore a new flavor profile.  However, if you’re only interested in these because you’re a big Cinnamon Bun fan, you really ought to just spring for the real thing: a Pillsbury Cinnamon Roll is 140 calories each, while two Cinnamon Bun Oreos will set you back 150 calories, without that warm, gooey, cakey goodness you’ve come to know and love from a real cinnamon roll.