Good grief, the clothing manufacturer Zara has done it again: they released a product in their fashion line that is reminiscent of the Holocaust.

A few years ago, the company produced an embroiderered handbag that had little swastikas on it that caused a similar uproar, resulting in the bags being pulled from stores. You would think that, after that incident, they’d learned their lesson to be a bit more sensitive to symbols associated with the Holocaust.

But no, now we’re finding out that they recently produced a striped shirt with a yellow star that is eerily reminiscent of the clothes worn by Jewish concentration camp prisoners.  Here’s a side-by-side so you can judge for yourself: 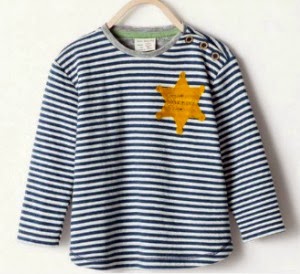 You can read more about the controversy HERE.