I’m not Jewish, but that didn’t stop me from taking part in the Passover holiday preparations this year. My youngest daughter went to a Seder tonight, so I got a recipe from a friend for Peach Kugel.  I’ve only had kugel made with egg noodles, not matzoh farfel, so the texture was different from what I was used to, but the end result was still delicious. It’s similar to bread pudding, and tastes best when it’s warmed up (I put a little Redi-Whip whipped cream on top–not exactly kosher, but delicious nevertheless). 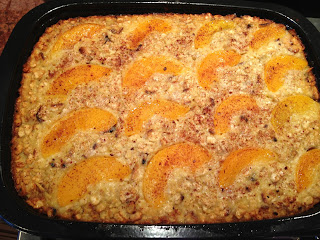 This is what the container of farfel looks like, fyi: it’s really just crumbled up Matzoh.