There was a time when I used to enjoy reading Newsweek.  Then came the rise of 24-hour news channels and internet news sites, all providing stunning visuals and breaking news in real time. Weekly news magazines like Newsweek quickly became outdated dinosaurs   The only way for Newsweek to compete and try to stay relevant was to offer in-depth, thoughtful analysis. But, with the rise of political blogs, they lost even more ground.

Now, the folks at Newsweek are just plain desperate.

Their latest cover poses the question: “Why Are Obama’s Critics So Dumb?”  Since when did elitist name-calling become a substitute for well-researched journalism? The editors at Newsweek are not even trying to pretend that they’re a legitimate source of news anymore. I can’t decide if it’s more sad than pathetic.

This cover story is just the latest in a long line of questionable choices made by the Newsweek editorial board.  They’ve taken heat in the past year for their gleefully unflattering covers of Tea Party favorites Michelle Bachmann and Sarah Palin, but those weren’t the worst of it. 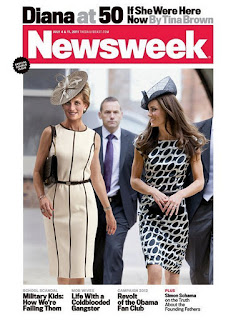 For me, the most egregious “jump the shark” moment for Newsweek came when they photoshopped a 14-years-dead-and-gone Princess Diana, digitally aged to appear 50 years old and walking alongside her son’s soon-to-be wife, Kate Middleton. A new low that even the sleaziest tabloids have not attempted. Disgusting.

It was a blatant ploy to exploit the late Princess Diana’s enduring popularity as a taken-too-soon icon. Almost a decade and a half after her death, Newsweek still couldn’t resist going to the well one more time, disregarding the unseemly fact that it was the media’s unhealthy obsession with capturing Diana’s image that led to her tragic death.