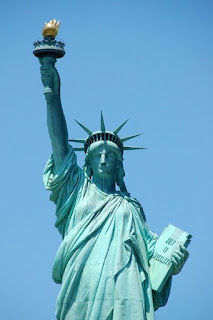 Today, we decided to take advantage of the beautiful weather and take the kids to see the Statue of Liberty. We purchased the tickets last night online (www.statuecruises.com), and set out to Liberty State Park in New Jersey to pick up the ferry. [Note: the NJ ferries do a loop from Liberty State Park to Ellis Island, then to Liberty Island, then back to NJ. The NY ferries start in Battery Park, stop at Liberty Island first, then Ellis Island, and back to NY. You can “island hop” and take any of the ferries back and forth, but once you disembark at one of the origination points, you can’t get back on.]

Weather-wise, it was a perfect day. Our ticket reservations were for 11am, but we got there early at around 10am, so we made our way to the security checkpoint to wait for the ferry. For some reason, they found the contents of my handbag fascinating, and the extra time it took to get through security caused us to just miss the 10:30 ferry. Oh well. We were early anyway, so we enjoyed the view of the waterfront while we waited.

The next ferry arrived within 15 minutes, and departed at 11am. We got a seat on the open top deck and had great views. The right side is a bit better than the left, but it really doesn’t matter where you sit because once the ferry starts moving, you can simply get up out of your seat and walk over to the rail for a photo-op. On one of the ferry rides, we stayed on the middle level of the ferry, and that worked out great. The kids and I sat on the benches until departure, and then we joined Rich out on the front of the ferry, which afforded us perfect views–it wasn’t nearly as crowded as the top deck.

When you leave from the NJ side (Central Railroad of New Jersey terminal, near Liberty State Park) the first stop is Ellis Island. (There’s a $7 charge for parking in the main lot at the CRR terminal. There’s also 2-hour parking available there for free, but that’s not a viable option if you’re visiting attractions, because of the timing of the ferries.) Then, the ferry goes on to Liberty Island (where the Statue of Liberty is) and then returns to Port Liberty. We got off the ferry and were told there would another one leaving Ellis Island at Noon, then another at 12:40, and another every 40 minutes after that.

We got there in time to see the 25-minute film about Bela Lugosi’s arrival through Ellis Island, but we decided to skip it because the last thing we wanted to do was sit and watch a movie. There were some ranger-guided tours available, but we much prefer to do a self-guided tour and go at our own pace. We took some pictures outside the main building, then went in and checked out the exhibits. There are free maps available at the information desk–no need to wait in line, just go up and grab one. 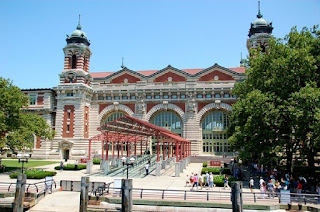 Some Ellis Island highlights: the Baggage Room display on the main level, with all of the old steamer trunks that people used to transport their possessions when they came through Ellis Island; the Peak Immigration Years exhibit with its information on exactly what kinds of conditions caused so many immigrants to leave their homeland seeking a better life (particularly jarring were the photos of the Russians who survived the pogroms); the Registry room (where my grandparents all came through and were processed when they arrived from Italy); the grandeur of the Dormitory room (stand in the center at either end and you’ll hear an echo when you talk), and my favorite, the Treasures from Home exhibit, which featured precious possessions that the immigrants carried with them to their new country. We saw baby shoes, linens, handcrafted plates, musical instruments, and lots of prayer books from all different countries, including Italy, Yugoslavia, Poland, Russia, Germany and Ireland. It begs the question: if you were leaving home, perhaps never to return, what items would you absolutely have to take with you?

Helpful tip: use the restrooms located on the 3rd floor, next to the Bob Hope Library. They don’t get as much use as the ones on the first floor, so they were clean and more private. There’s also a water fountain right there where you can refill your water bottles.

It was getting close to Noon, but we decided to have lunch on Ellis Island instead of catching the next ferry, and that turned out to be a very wise move. The Cafe on Ellis Island had surprisingly good food–a wide variety of choices, and a kids’ menu that had something for everyone. Rich had a Fisherman’s platter (fried fish, shrimp & crab cakes with french fries and coleslaw) and I had a Lobster Roll (lobster salad with avocado on a brioche roll, with pickle and kettle chips). 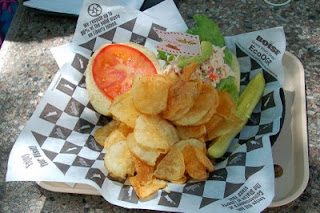 My older two girls had chicken fingers and fries, and the youngest had pizza, both choices off the kids’ menu. Theirs came with drinks (Goodness Grapeness organic grape juice packs) and I shared a Diet Snapple iced tea with Rich. They also had sodas and water–a big selection of drinks. There was indoor seating adjacent to the cafe, outdoor seating on the upper level (lots of sun up there) and additional seating just down the steps along the waterfront that offered plenty of shade under the trees. That’s where we ate, and it was perfect. The cafe on Liberty Island was more crowded, and all of the outdoor seating was full, so we made the right decision eating at Ellis Island.

We treated ourselves to some homemade fudge for dessert (available at the Cafe: buy 4 pieces, get 2 free. Cost: $15.80. Yes, pricey, but the pieces were large, lasted us a long time, and they were worth it. Lots of flavors available, too. We purchased: one plain chocolate, two peanut butter & chocolate, one caramel peanut fudge, one mint chocolate swirl, and one cookies & cream. All delicious!) 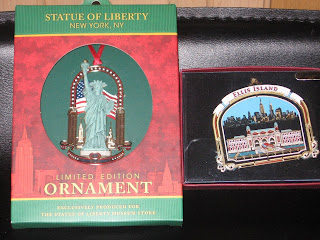 The gift shop at Ellis Island is the place to purchase your souvenirs. There’s also a gift shop on Liberty Island, but it was awful: it was in a tent with no air conditioning, unbearably hot, and way too crowded. The Ellis Island gift shop was far more pleasant: air-conditioned, had all of the same stuff the Liberty Island shop had, AND it had some unique items relating to the immigrants who came through Ellis Island.

There were the usual gift shop offerings (magnets, ornaments, key chains, mini-Liberty statues, books, t-shirts) but there were also hand-crafted items that were imported from various countries, including Italy, Russia, Ireland and Poland. 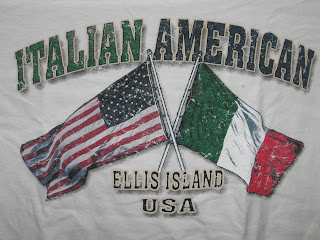 They also had keepsake pins from these and many other countries, including China, Denmark, Japan, etc. We bought some Christmas ornaments, a t-shirt, and some hand-painted Nesting Dolls made in Russia. 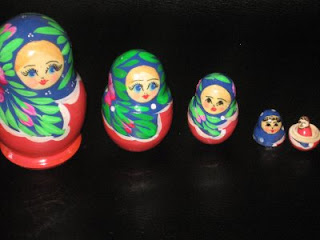 After some shopping, we took the 12:40pm ferry over to Liberty Island. Seeing the Statue of Liberty up close is really a thrill. We didn’t purchase tickets to go inside this time, and I was glad, because it was really hot at this point, and the lines to go inside were very long. Instead, we ate some of the fudge while sitting in the shade at the base of the monument, then we walked along the waterfront taking pictures. You have great views of the Manhattan skyline across the water, and the sky was so clear, we were able to see the George Washington bridge, the Brooklyn Bridge, the Manhattan bridge, and the Verrazano-Narrows bridge out in the distance. There were lots of sailboats on the water, and other ferries such as the Circle Line and the Staten Island ferry.

We popped into the gift shop and it was like an oven in there, and once I saw that it had the same stuff we’d already seen at Ellis Island, we walked out and headed straight for the ferry back to NJ. The line for the NY ferry was much longer, but once the ferries pull in and the passengers get off, the lines move pretty quickly.[Note: there’s a limited selection of Statue of Liberty souvenirs available for purchase on the 2nd level of each ferry, and refreshments for sale such as hot pretzels, chips, and drinks.] 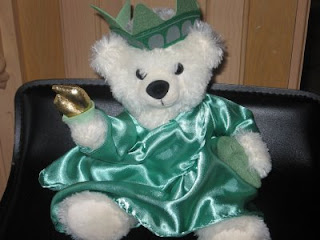 Back at the CRR terminal, we went inside and took a few photos of the old train station. There are also a bunch of brochures there for sights and attractions all across New Jersey, so I grabbed some for future reference. There was also a white teddy bear dressed as the Statue of Liberty that my 9-year-old was eyeing up throughout the day (it was for sale on the ferry, too, but the line for refreshments was long on the trip back) so before we left the CRR, I bought her one. We had a great time, and will definitely do more of these NJ day trips this summer.