As we headed towards warmer waters, it still a bit too chilly outside to take full advantage of our balcony, but some brave (or maybe just crazy?) souls ensconced themselves in the hot tubs on the pool deck, despite the cold temperatures. Gotta get your money’s worth, I guess.

It’s days like these—a full day at sea on a ship packed to the gills with passengers—that you appreciate being on such a large vessel. Despite the ridiculous number of kids on board, it still wasn’t difficult to find a quiet spot if you really wanted one. The Promenade was always bustling, but the bars on the higher floors of the ship (Dizzy’s in particular) offered a respite.

A word about the “Kids Zone” programs: for teens and tweens, they were for all intents and purposes NON EXISTENT. My two teens checked out the program on our first night, and while the 14-year-old managed to make some friends, the 12-year-old found it boring. The list of planned activities that is handed out each day is a total waste—every time my girls showed up for an activity, it was cancelled or just not happening. My eldest daughter ended up going to Deck 14 simply to meet up with her new friends, and then they were left to their own devices to find stuff to do. By the last two sea days of this cruise, that became problematic. There were “packs” of children wandering around the ship, pressing all of the elevator buttons, bored stiff and looking for things to do.

Another gripe: the Crown & Anchor coupon for Arcade Game Credit was a total ripoff. As it is, many of the games that offered prizes (especially the “claw” game) were broken throughout the voyage. There was one game that gave out tiny little trinkets (rubber balls and plastic rings, mostly) which my daughters loved, but of course, that was constantly on the fritz, too. Still, I let them play because there wasn’t much else to do on sea days, and the coupon we had was good for “$15 of arcade credit when you purchase $10 of arcade credit.”

It turns out, after we tried to redeem it, we found that the credit is only good for certain machines—the ones that don’t give any prizes. It also took a few days for the credit to kick in, and by then, the kids had lost interest.

So, it was a bit of a “lazy” day for us, which isn’t necessarily a bad thing. We spent lots of time just strolling around the ship, popping into the gift shop (yes, Cathy had to buy another towel animal…no surprise there) and attending one of the “jewelry unveiling” events. We didn’t win the raffle this time, but the girls always love the anticipation of it. We also spent some time up at the 19th Hole, watching the “mousetrap” machine.

Highlights for this sea day: Rich sent me chocolate-covered strawberries for Valentine’s Day, which I shared, naturally. We also brought along stuffed teddy bears and chocolates for the girls. Since there wasn’t much to do other than a couple of trivia games during the day, we all had plenty of time to get ready for Formal Night. 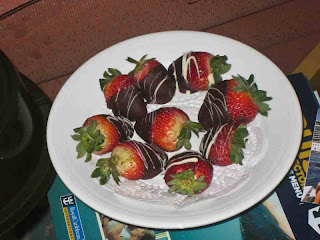 We also had a visit from a couple of folks we’d met during the Muster Drill on Day 1. Mike was traveling with his daughter, Cassie, who was around the same age as my youngest daughter. The girls hit it off, so they popped in for a little while before going to dinner (they had early seating, we had late seating). Cassie was amazed by all of the hair implements my daughters had lugged along with them, so I offered to do her hair for the next Formal Night. Throughout the rest of the cruise, Mike and his daughter become good friends, and we exchanged email info by the end of the vacation.

The lines for formal portraits were, predictably, quite long. For some reason, though, there was one photographer just outside of Studio B on the lower level that had no lines whatsoever. The backdrop he had was a bit plain, but he did a great job and we were glad not to have to wait. We preferred his backdrop to the cheesy fake sunsets anyway.

The menu in the dining room was fantastic, and included Escargot as an appetizer. It was absolutely delicious, and rivaled the escargot I had in Paris eight years ago. Photographers came around the table to take pictures, which were matted with a Valentine’s Day border—very nice.

After dinner, we went to the stage show, Vibeology. It was good—not great, but not a bad way to wrap up a lazy day at sea.