Our trip began on February 13th (yes, indeed, Friday the 13th!) in Bayonne, New Jersey. It was a quick ride to Cape Liberty, and we didn’t hit that wall of traffic that we experienced back in August for our Bermuda cruise. This time, we drove right up to the luggage/passenger drop-off area.

Unfortunately, Rich ended up waiting on a long line of cars to pay for the parking, and it took nearly half an hour. If we’d gotten a car service, we could have just walked right in.

It wasn’t so bad waiting, though, because we got to meet lots of our fellow passengers (most of whom were standing around because they, too, had someone parking the car out in lord-knows-whereville). We also made small talk with the Royal Caribbean representatives who standing just outside the check-in entrance. They were quite friendly—until I asked them, “So, any word on whether or not the propeller is fixed?”

I should explain: thanks to the message boards at www.cruisecritic.com, we found out that in late January, the Explorer struck a coral reef while leaving Samana in the Dominican Republic, damaging one of the ship’s three propellers. It ended up skipping Labadee that trip, and limping back into Bayonne for a repair, arriving on February 1st. Unfortunately, the water was deemed “too murky” and the ship sailed again later that day on 12-day cruise. One of the passengers from that trip continued to provide updates from the ship’s internet café, so we knew that they were skipping San Juan and heading straight to St. Thomas at a reduced speed, where they hoped to fix the problem.

All of this was kept very hush-hush by Royal Caribbean (in fact, several passengers who called the main hotline for RCCL were told that the prop had been fixed already, when we knew—thanks to the passenger onboard—that it had not). I suppose they didn’t want to panic anyone or have folks canceling their trip, so the official word from RCCL was there was nothing wrong.

It turns out, a short-term fix was made to the propeller, but it won’t be fully repaired until the ship goes into drydock, which is not scheduled until January 2010. The damaged propeller was shaved down in order to balance it better, but it wasn’t a perfect fix, which means the ship cannot go at full speed. The difference between 22 knots and 19 knots may not seem like much, but it’s enough to make RCCL alter their itineraries (mostly arrival and departure times) from now until the repair is made.

The slower speed didn’t affect us too badly: we ended up staying longer in St. Thomas than originally expected, and cutting things really short in Puerto Rico. That was a bit of downer, since we arrived at 6am and had to depart by 11am. Nothing was open before 9am, and the girls didn’t end up getting off the ship at all in San Juan. Still, I was glad that we made a stop there at all, and Rich and I did manage to do a bit of sightseeing in Old San Juan.

What bothered me was Royal Caribbean’s reluctance to admit that anything was amiss, and their obviously calculated campaign to do everything they could to hide the truth from the passengers. The staff members at Bayonne looked at me as if they had no idea what I was talking about when I asked about the broken propeller…and then I walked about 10 feet from where they were standing with their walkie-talkies, and another employee handed me a letter informing me of the itinerary changes. The letter revealed nothing about why these changes were necessary; all it said was “the Explorer of the Seas is temporarily sailing at a slightly reduced rate of speed.” Several shore excursions had to be cancelled as a result, but those folks did have their money refunded. Still…I was very happy that I was “in the know” as to the real reason we were switching things up, and once again, gave thanks for the great info that I had received from those who posted on Cruise Critic.

The check-in process itself went smoothly. Even though the lines can seem intimidating, they have things down to a science, with plenty of staff on hand to corral you to the next available window. The shuttle buses were crowded, but arrived quickly to take us to the ship. We were excited to see our rooms, because we booked aft cabins this time (7688 and 7690). The balconies for these cabins are larger than most, and we were looking forward to the increased privacy (and decreased foot traffic) that comes with staying at the rear of the ship.

Now that we’re back, I can tell you that the aft cabins were definitely a great find, and I would stay there again in a heartbeat. I slept soundly every night, and was not woken up by people walking past my cabin constantly. There was a low humming noise and a bit of a vibration back there—some said it was due to the broken propeller!—but whatever it was, it helped us get a good night’s sleep, so no complaints here. We loved the aft cabins, and I intend to book that location again if we do another cruise. Yes, there is some extra walking involved to get to other parts of the ship, but the bit of extra distance was well worth it.

A snippet of muster drill. Cathy asked me what the light was for, and I told her that it activates when it gets wet so that rescuers can find you in case of an emergency. Of course, she immediately tried to put it in her mouth to get it wet, and I corrected her. That’s why she’s asking if she can wear it in the pool.

After the obligatory muster drill, we headed up to the 19th Hole bar, where we’d pre-arranged to spend Sail Away with the folks we met online in our Roll Call thread on Cruise Critic. One of the posters was nice enough to make name tags for everyone (thanks, Gail!) and we also had a book exchange, which was fun. The lounge was a little smoky, though, so we didn’t linger as long as we would have liked.

Oh, another great thing: one of the folks we met was staying on the Concierge level, and she snagged a bunch of extra tickets to the Ice Show: “Blades: The Ice Challenge Show.” Normally, they’re not available for distribution until 7pm in the Royal Promenade, but I guess a perk of staying on the Concierge level is that you can have them in advance of everyone else. The tickets are free, but it can be a bit maddening to wait on that line, so she really helped us out by giving us the tickets.

We were happy to see a few familiar faces amongst the crew, and one of the holdovers from our cruise aboard the Explorer in August was the Cruise Director, Mike Hunnerup. He’s from Australia, and his signature greeting is “G’day, folks!” to which you must respond, “G’day, Mike!” We enjoyed seeing him again, and thought that he and his staff did a great job—especially Darryl, who was absolutely hilarious. It got to the point where we would attend any activity Darryl was hosting, whether or not it was something we were even remotely interested in. We weren’t the only ones, either—he drew crowds wherever he went.

One scary moment: our two largest pieces of luggage didn’t show up at our room, and it was getting close to dinnertime. Rich and I couldn’t believe that this was happening AGAIN—as you may recall, Celebrity lost our luggage (along with the luggage of two dozen other unfortunate passengers) during last February’s Caribbean cruise, and for about 45 minutes or so, it really seemed like lightning was striking twice. We asked our room steward, and he said that all of the luggage had already been brought up. Lovely.

We headed down to Guest Services, and they said that sometimes labels fall off of suitcases, or the bags are otherwise misdirected or placed in the wrong stateroom. They told us not to panic, but as we were looking at two full sea days with no clothing, it was definitely a nail-biting experience.

The rep excused herself for a moment and said she would go in the back to call down and see if there were any bags matching the description we’d given her. Rich and I were already resigning ourselves to the idea of having no clean underwear for 3 days when she returned to say that our bags had been located and would be sent up immediately. A happy ending!

We were so thrilled, we proceeded immediately to the Crown & Kettle for a celebratory drink. Let the vacation begin!

On the way back to our room, we passed the freight elevator, and saw some bags sitting there. Two of them looked familiar, and sure enough, they were ours. We didn’t bother waiting for our room steward—we each grabbed one and lugged them down the hall to our stateroom. Crisis averted!

The kids were tired and decided to skip the Welcome Aboard show and meet us in the dining room. It was just as well: the featured act was comedian Steve Smith, and we thought some of his material was inappropriate, and just not funny. Example: he did a riff making fun an interpreter who was translating his show into sign language for a special needs passenger. It wasn’t funny, it was rude and a bit cruel. I was glad the kids didn’t go, and Rich and I agreed to skip this guy’s other show scheduled for later on in the cruise.

At dinner, we were seated at a table for 10, although for the first few nights, it was just the 5 of us there. After a few days, the other family showed up, and once their growing teenage boys realized that you could order two of everything (including the NY Strip steak), they showed up every night promptly at 8:30. 😉

Our dining room staff (Sevitan and Rolando) were a bit quiet but courteous that first evening, but one thing was clear: they worked well together. The service was quick and efficient, even though it was the first night—one when they’re usually working out the kinks. As the days passed, our waiter opened up and became chattier, doing magic tricks for the kids and making small talk between courses. The head waiter Tomislav was also a great guy, and hailed from Croatia—the same country where Rich’s grandparents are from. When I tried out some of my phrases on him and expressed a willingness to learn more Croatian words, he was so pleased he immediately produced a Croatian travel guide/phrase book and loaned it to us for the rest of the cruise. In return, the girls and I studied up and rattled off some new words every night. The smile on his face when my half-Croatian daughters counted to 10 in his native language was really something to see. 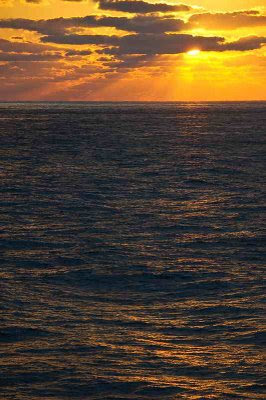 After dinner, we headed back to the room for some much needed rest. We had two full days at sea ahead of us, and were looking forward to Formal Night the following evening—which just happened to be Valentine’s Day!