Peeps marshmallow candies have been around longer than I have–according to Wikipedia, the chick-shaped sugar-coated confections first debuted in 1953, produced in Bethlehem, Pennsylvania.   As a child, no Easter holiday was truly complete unless you had one of these bright yellow, sticky, marshmallow chicks waiting for you in your Easter Basket.

Eventually, the Just Born company started releasing Peeps in a range of colors.  From Wikipedia: The yellow chicks were the original form of the candy — hence their name — but then the company introduced other colors and, eventually, the myriad shapes in which they are now produced. Peeps were manufactured in different colors such as lavender and blue starting in 1995. Prior to that they were only being produced in the traditional colors: pink, white, and yellow. New flavors such as vanilla, strawberry, and chocolate were introduced between the years of 1999 and 2002.” 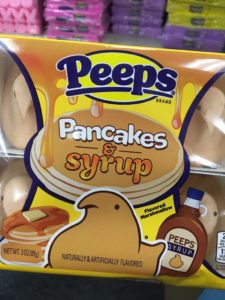 I’m sorry to report that things have officially gotten out of hand.  In keeping with the relentless onslaught of “Limited Edition” flavors that our tried-and-true favorites have been releasing (yes, Oreos, I’m looking at you), the other day, I stumbled across Party Cake Peeps and Pancakes & Syrup Peeps.

My expectations, dear Reader, were not high.

It took us a few days to work up the nerve to taste them, and we started with the Pancakes & Syrup Peeps because we figured those would be nasty, and then we could cleanse our palates with the Party Cake Peeps. 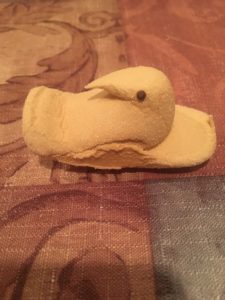 As it turned out, the Pancakes & Syrup Peeps were actually quite good. Yes, they’re super-sweet, but they smell and taste EXACTLY like imitation maple syrup–which is to say, not nearly as good as Grade A Pure Canadian Maple Syrup, but not bad.  They also had a nice, consistent color–like they’d been basking on the beach in the Caribbean and came home with a tan. 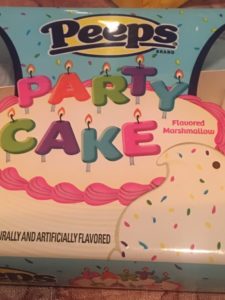 The Party Cake Peeps were another story.  The aroma as soon as you open the package is distinctly familiar.  No, not birthday cake–they smell exactly like Play-Doh.   I kid you not.

As for the taste–ugh.  I couldn’t get past the first bite. It didn’t really have a flavor other than the usual marshmallow, but the smell of Play-Doh was so off-putting, I chose not to continue.  My daughters each finished theirs, and agreed–barely any flavor, and the smell was weird and off-putting.  Their appearance was also strange–ghostly white with odd green, yellow and blue speckles, like a sick chick with a rare case of Skittles pox. 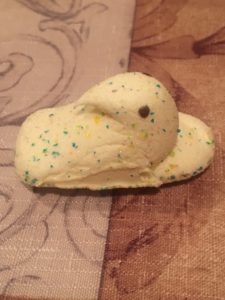 The verdict:  Pancakes & Syrup may be worth trying if you’d like to experience the novelty of it (or to have an excuse to eat Peeps for breakfast) but skip the Party Cake Peeps–they’re not worth it!