Earlier this morning, a friend tagged me in a post about three new Oreo flavors that were being released: Kettle Korn, Cherry Cola, and Piña Colada.  Lo and behold, I found them just a few hours later at my local Wegman’s supermarket.

It appears that Nabisco is copying the brilliant marketing strategy that Lay’s Potato Chips has been employing, turning their Limited Edition flavors into a contest, where consumers vote for their favorite flavor.  (more info can be found on the Mondelez website) Voting begins on April 30th.

I’ve been on a healthy eating kick lately, avoiding sugar and processed foods, so I actually hesitated for half a second before putting these in my cart.  Who am I kidding? If there’s a new flavor, I have to try it and report back. Rest assured, those of you who are thinking that I should be downing a kale smoothie instead of indulging in sandwich cookies, right after I finish posting this review, I’ll be hitting the treadmill. So don’t pester me–it only makes me want to eat another cookie when I’m done working out. 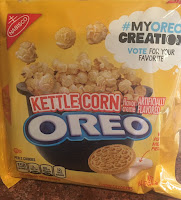 Full disclosure: I love kettle korn popcorn. I wasn’t introduced to it until my early 40s (I know! What the heck?) but it’s my favorite type of popcorn, right up there with caramel corn. Some types of kettle korn are made with white sugar and salt, but others (the BEST kind, hello) are made with brown sugar, which give it a caramelized goodness that is highly addictive.

Well guess what? Kettle Korn Oreos taste just like brown-sugar coated Kettle Korn.  Which is to say: I think I have a new favorite Oreo flavor!

﻿
What’s really interesting about these Oreos is that the crème filling has “puffed millet rice” pieces added to it. Hmmm….that’s different! But in the best possible way.  It adds a layer of texture and crunch that is particularly satisfying if you’re the type of Oreo lover who twists open the cookie, eats the filling first, and then the cookies.
﻿﻿I think someone at Nabisco must be reading my reviews at this point, because the ratio of crème filling to cookie was outstanding–well done to whomever made that call. The crème is the star of the show, imparting a caramel flavor, with just a tiny hint of salted butter–just like real Kettle Korn.

I loved these, and give them an A+.  (Note: the link above will take you to Amazon, in case you have trouble finding these at your local store, but do NOT pay more than $4 for them. Some greedy seller had them up there for $17 a bag today–meanwhile, they were less than $3 a package in Wegman’s. They’re good, but let’s not get crazy–they’re just cookies.) 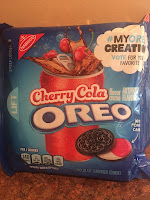 I wasn’t sure how to feel about these–while the concept is interesting, and I love the idea that they included “exploding candy” in the filling so that you get that “fizz” experience like with real soda–I’ve noticed that Oreo doesn’t have a good track record when it comes to duplicating fruit flavors. 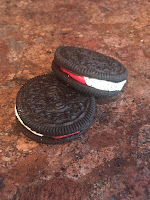 As soon as I opened the package, the smell of cola filled the air–they definitely nailed the scent that you get when you pour out a can of Coke. Okay, so far so good.

Once again, the crème filling to cookie ratio was substantial, and the fact that this is a chocolate sandwich cookie definitely appealed to the “purist” in me. (I have a friend who, every time I do one of these reviews, reminds me that none of these cookies are “Oreos” as far as he’s concerned, because he’s a traditional Oreo loyalist: white crème filling between two chocolate sandwich cookies are the only Oreos he will officially recognize as such.)

The downside to the filling: the color. oof, but that red is garish and scary looking when you first see it. There’s no natural food that I’m aware of that is that particular shade of red. (I suppose I would call it “candy apple red”…and candy apples are made with artificial red dye.) 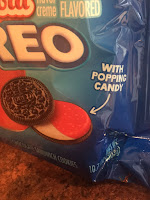 So, how did it taste?  I took a bite–and honestly, one bite was enough. Ugh.

My first reaction was that it tasted like I was eating a cherry-cola scented crayon. The flavor is just way too artificial and cloying. It’s not even trying to mimic real cherry flavor, but rather, the fake cherry flavor you get in a Cherry Cola. I understand that’s what they were going for, but there’s a big difference between drinking cherry cola and eating a cookie with that same flavor profile. It’s just too much–far less subtle and way too heavy-handed.  Blech.  I did sample the filling by itself, and….no.  Don’t.

I would give these an F, based on flavor alone, but I’m going to up that to a D- because of the one saving grace: the popping candy in the crème filling. It adds a nice element of fun to an otherwise dreadful offering. This is one option that I’m happy to see is a “limited edition.”  If you’re a fan of the popping candy, just wait a few more months and get the Firework Oreos instead. These are nasty. 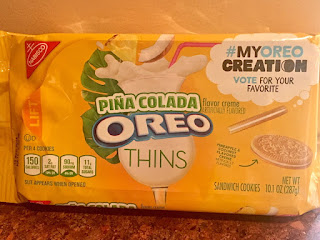 Okay, hang on a second–we need to talk about this “Thin” business.  Why? Who thought this was a good idea?  If I want to have a cookie, I’m having a cookie–not some lame wannabe cracker trying to disguise itself as a cookie.  I’ve never had an Oreo Thin, until now, and I can tell you I won’t be buying them again anytime soon, just on principle.  Seriously, it’s an abomination to call this thing a “cookie.”  Stop it.

Nevertheless, I tried to keep an open mind, but then I opened the package and saw this: 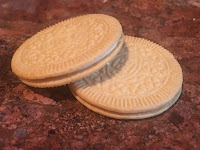 You practically need a microscope to see the filling. I am so underwhelmed and I haven’t even tasted the darn thing yet.  The “sandwich cookies” (aka crackers that sit on a throne of lies) are so delicate, you have to be super-careful twisting them apart.  Who has time for that?

At this point, I promised myself I would have another Kettle Korn Oreo as a palate cleanser after this one–yes, I had to bribe myself to continue.  Sheesh.

Okay, so the only redeeming thing about these is that the filling has a nice, smooth consistency, more like icing than frosting.  They don’t smell strongly of pineapple or coconut (BECAUSE THERE’S BARELY ANY FILLING #abomination) but the flavor is spot on Piña Colada–it’s a balanced blend of both pineapple and coconut, at least, from what I could tell of the thimble-sized portion that was squashed between the vanilla crackers.

For overall flavor, I would rate this a B+, but from a snack satisfaction standpoint, I must downgrade that to D.

I’m sorry, but if you don’t stand for something in this world, you stand for nothing.

Final verdict: Stock up on the Kettle Korn cookies, skip the Cherry Cola ones, and write a strongly-worded letter to Nabisco about the difference between a cookie and a cracker.