I’ve heard of the TV show, “My 600 lb Life” but never watched a single episode–until tonight.  I was flipping channels and caught her episode just as it started, and the preview where she says that her mother and pediatrician put her on diet pills when she was only 4 years old got my attention.

Learn more about her story on TLC at this link. 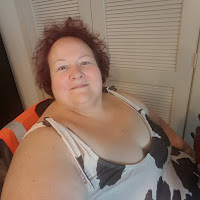 My heart breaks for this woman. Janine is 678 pounds, and in so much pain.  At 54, her prognosis to live another 12 months is very poor.  The show follows her journey, and the obstacles she faces trying to get healthy. She lives alone, her parents are both deceased, and her siblings live too far away to help her.  The show refers her to a doctor in Houston, Dr. Nowzaradan, who specializes in patients who are in need of bariatric surgery, and weigh 600 lbs or more.

This episode does not shy away from the harsh realities that Janine faces. She needs to get on a plane to fly to Houston and see the doctor for a consult, but it’s just not that simple. She can barely walk, and has a large lymphedema (extremely swollen lymph node) on her leg that has made mobility difficult unless she uses a motorized scooter, and even then, getting around is very painful.

She has to pay someone to help her pack her suitcase and get to the plane, but when the time comes to board, her weight makes it impossible.  Although several airline personnel try to help her, she cannot get onto the plane, injuries her knee to the point where there is blood evident on the floor of the plane. She has a panic attack and has to be removed on a stretcher.

While the show does not shy away from showing the physical limitations of Janine’s size (going so far as to show her shower routine, blurring only some of her naked body as she talks about the importance of keeping her many “folds of skin” clean and free of infection, and also a scene of her using the toilet, where she unflinchingly holds up an extender grip loaded toilet paper and says, “Yes, this is how a fat person wipes their butt.”) they do not delve nearly enough into the mental and psychological issues that are clearly a large part of Janine’s weight problem. It’s interesting to see that, when she’s alone, she can somehow manage to muster the strength to the move from her bed to her scooter, down the elevator of her apartment complex, all the way to the drive through fast food restaurant in order to pick up a 20 piece nuggets, large fries, and large Dr. Pepper.  But, when needs to get in and out of a car, or on a plane, or even up on the scale at the hospital, she can barely do it even with half a dozen people on hand to assist, suffering crippling panic attacks that render her immobile.

After the first aborted attempt to fly to Houston, Dr. Nowzaradan sends her a diet to follow (1200 calories!) and convinces her that she must try the plane trip again, because if she does not, she will not live more than another year. She decides to make it a one-way trip, and move her entire life to Houston so that she can fully commit to getting the weight loss surgery.  It’s a bold move, and–one would think–an indicator that she is willing to try and make positive changes.

But this is not a scripted fairy tale, and the challenges continue. Janine attempts to get on the plane again, and after a great deal of difficulty and almost giving up, she does succeed. The triumph is short-lived, however, and as the flight gets underway, she experiences painful swelling that becomes too much to bear. She lands in Dallas and has to be taken off the plane by ambulance, unable to make her connection to Houston.  Her sister-in-law, who had planned to meet her in Houston, flies to Denver instead to help her in the hospital.  She arranges for Janine to be transported by ambulance to Houston, so that she can finally see Dr. Nowzaradan.

The doctor is clearly concerned about Janine’s overall health, but has serious doubts about her ability to stick to the diet, since she weighs even more than she had originally indicated. He is clearly frustrated with her, and despite her assertions to the contrary, he can tell that she has not been following the diet he provided to her, and has not been making an effort to get more mobile.  He then discovers that Janine has a serious skin infection, and decides that she must  be hospitalized right away.  This also gives him the opportunity to strictly control her diet–something she is not at all happy about.

After 2 months in the hospital under supervised care, Janine has lost 118 lbs!  She is desperate to get out and go home, finding the diet too restrictive. Dr. Nowzaradan tells her that she must start psychotherapy to deal with her eating issues, and to stay on a 1200 calorie diet in order to lose enough weight to get bariatric surgery. She assures him she will.

Janine’s niece Rachel comes to visit her at home, and is so kind and patient with her. She reminds her aunt of all of the family occasions that she has missed because of her weight, and shows her some simple exercises she can do, even from her bed. Janine seems to respond well to the positive encouragement, but it all starts to sound a bit like lip service, especially when Janine reveals that she still has not seen the therapist yet.

Janine promises to follow the diet, promises to exercise,  and says she will attend therapy, but when she returns to see Dr. Nowzaradan a month later, she has gained back 63 lbs,and is once again over 600 lbs.  He asks her how she feels about the setback, and she defiantly says she feels “pretty good about it.”  The doctor is clearly angry with her cavalier attitude, and really rips into her, but you can tell that his frustration is rooted in genuine concern for her well being.  He refuses to listen to her excuses. She hasn’t seen the therapist yet, hasn’t followed the diet, and he tells her that they must do something drastic or she WILL die in a few months.  He decides to put a gastric balloon in her stomach to keep her from eating too much, because if she keeps gaining weight she will die, and at this point, he is most concerned with saving her life.  Unfortunately, there is so much excess fat in her abdomen, she has to have the procedure in the hospital, where a more powerful x-ray machine will help the doctor guide the balloon into place.

Getting her to swallow the capsule with the deflated balloon is difficult–and hard to watch–but they succeed. A graphic pops up on the screen that says Janine has lost 42 lbs since the balloon was put in place, and is now 566 lbs, for a total of 112 pounds lost since the start of her weight loss journey.  (Given her height, she has over 400 lbs left to lose.) 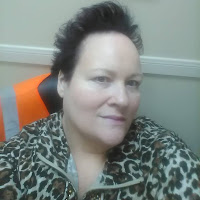 Her niece Rachel comes to visit again, and once again, she is kind and compassionate, and gives her aunt a much-needed pep talk. She offers encouragement and support, and gives Janine many reasons to keep fighting. “I feel like you’ve missed out on my family’s life. We need you there.” Rachel begins to cry and Janine apologizes, and it feels like she has finally had a break through.   The show ends with Janine vowing to “make this next year count” and to not let down the people she cares about most.

I hope that TLC does periodic follow-ups with Janine, and I hope that she is seeing a therapist who can offer her the kind of positive support and encouragement she needs in order to get healthy. The photos included here were posted on her Facebook page, and she does look like she’s lost more weight since the show was taped.  I’m rooting for Janine, and hope that she gets healthy so that she can start enjoying life again, and spending more time with her family.