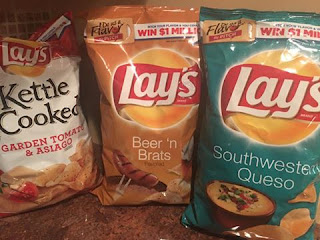 I just did a late-night grocery store run with my daughter, and couldn’t resist picking up the 3 “pitch” flavors from Lay’s. They’re limited edition potato chip varieties, meant to generate interest in the Do Us A Flavor contest.

Well, it worked. Because goodness knows, I can’t resist trying weird and unusual flavors and reviewing them for the blog.  So here goes:

Beer & Brats
I tried this one first because it sounded the most intriguing. They definitely have a smokey flavor and aroma, but the taste is very subtle, and there’s certainly no discernible flavor notes of beer present. They weren’t bad, but they weren’t “to die for,” and I don’t think I’d buy these again. Still, it was fun to try them out, and they do get bonus points for being thin-style chips, which are my favorite.

First of all, they’re “kettle cooked”, which is heinous. I don’t like chips that are small and loud and too crunchy, which is an apt description of the kettle cooked variety. Still, I tried to give these a chance, but they were just….not…good.

Yes, there were subtle flavors of tomato and cheese present, but overall, it tasted more like pizza chips than potato chips–and definitely not in a good way.  I think the real problem here is that the kind of person who enjoys the flavor of fresh garden tomatoes and fresh-shaved asiago cheese would much prefer to have it as a salad, not in a fat-laden chip form. So who is the target audience for this chip?  When you figure it out, let me know. In the meantime, these are a “No, never again” for me.

Southwestern Queso
I inadvertantly saved the best for last.  Wow, these were SO good. They’re the traditional thin-chip variety, but laden with lots of cheese flavoring–the chips actually look orange because of all the cheese.

They also have a pleasant saltiness that makes them addictive, and a spicy kick at the end which packs a lot of flavor into each chip.  I would definitely buy these again–the best way to describe them is: Cheetos in potato chip form, with attitude.  Definitely the best of the bunch.