I’ve confessed before that one of my guilty pleasures at this time of year is hunkering down against the cold, wintry chill and watching a cheesy Hallmark Christmas-themed movie.   I don’t expect these movies to be Oscar-worthy, in fact, the more predictable they are, the better. For me, Hallmark Christmas movies are like the equivalent of boxed mac ‘n cheese as comfort food: not the best or most high-quality thing, but reliable and generic enough to be entertaining and (if you’re lucky enough for the movie to be like the boxed mac ‘n cheese with the impossibly gooey, pre-made sauce in a silver pouch) satisfying.

Unfortunately, Once Upon a Holiday was a disappointment. It was bland and not engaging at all. The acting was awful, even by Hallmark movie standards, and the two romantic leads had zero chemistry.

As soon as the movie started, I was blindsided by the appearance of Greg Evigan, a TV heartthrob that I remember from my youth as a ruggedly-handsome, “guy’s guy” type.  As soon as he appeared onscreen in this movie, I recognized him, or should I say, this smoothed out, “age defying” version of him.  I fear he may have used the same plastic surgeon as country singer Kenny Rogers–their eyes look eerily similar now, and there’s something odd going on in his cheeks, like fillers or implants. 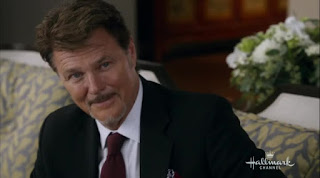 I hopped over to imdb.com to confirm whether or not it was him, and that’s when I learned that his daughter, Briana, was playing the romantic lead. Ugh. Even more of my childhood memories dissolving before my eyes. Nothing like watching the 29-year-old adult daughter of an actor you once pined for in middle school to make a person feel like Methuselah.

The premise of the movie itself was the usual Hallmark fare: a princess hides her identity to sneak away for some anonymous fun with common folk in New York City, where she meets a blue collar regular guy and becomes smitten, and he has no idea who she really is. Oh, the drama that will ensue when he finds out! And then they get past it and it all ends well.

There was a very similar version of this story on ION TV just the other day, but with the gender roles reversed, called “A Prince For Christmas.” That one is worth checking out.