Yes, I know–fast food is bad for you and totally unhealthy.  If you are the type of person who believes that anything that comes out of a fryer is an abomination against all that is good and pure, please do us both a favor: log off and have a carrot stick.  Trust me, we’ll both feel better. 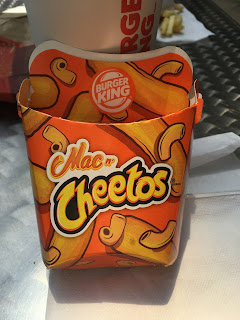 Now then, if you’re still here, let’s talk about the curious creation otherwise known as “Mac ‘N Cheetos” now being sold for a limited time at Burger King. They’re Cheetos-shaped Macaroni and Cheese bites, deep fried with crushed up cheetos in the breading.

If these are wrong, I don’t want to be right.

Full disclosure: I love mac n cheese.  LOVE. IT.  But the combo of pasta and cheese and salt is really not something one can eat on a regular basis without weighing 300 lbs, so I stop myself from eating mac and cheese as often as I’d like. (Which, honestly, would be EVERY SINGLE MEAL.)

So when I saw the commercial for these, even though I rarely ever eat fast food, I had to try them.

The biggest surprise was the consistency of the mac and cheese: it actually has some discernible sauce to it inside! Most mac n cheese bites I’ve tried are dry–because the macaroni bites need to be cold and firm before you can bread them, but the chilling process tends to ruin the sauce–but the Burger King version have a creamy quality that is very appealing. And I was also surprised at just how orange they are–not as intense as an actual Cheetos snack, of course, but you can certainly tell there are cheetos crumbs mixed into the bread crumb coating.  Yet, it’s not nearly as salty as I thought it would be. There’s a nice balance of breading to pasta, too.

My one complaint: there are only 5 per serving, and to me, that’s more like an appetizer portion than an actual lunch. However, I did feel satisfied after eating them, and was glad I didn’t go nuts and order two portions. Restraint! What a concept!!

I’ve read that these are supposed to come with Ranch dip on the side, but they didn’t offer me any, and I wouldn’t have used it anyway.  On their own, 5 Mac N Cheetos are 310 calories–not awful, all things considered.

Bottomline: If you love Mac N Cheese, give these a try. They’re an inexpensive ($2.49 for 5) and fun way to eat your mac ‘n cheese on the go.