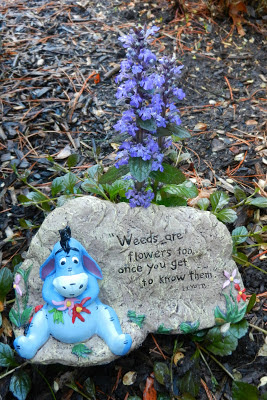 I bought this garden sign a few weeks ago, because I loved its message. It shows sad, misunderstood little Eeyore, making a plea on behalf of the lowly, much-maligned weed: “Weeds are flowers, too,” he says, “once you get to know them.”  Unfortunately, I don’t have the greenest of thumbs–okay, I admit it, I tend to kill every plant I touch. But weeds…weeds I can grow just fine! And so, I have an abiding affection for them. Most people hate weeds, and devote hours of time, great sums of money, and gallons of chemicals to get rid of them. Not me. I don’t particularly like the prickly kind (thistle) or the itch-inducing kind (poison ivy), but the flowering ones (like the Creeping Charlie rising up behind Eeyore) are always welcome.

The way I see it, if a weed in my garden has the audacity to adorn itself with colorful flowers, and thrive despite the fact that most people would rather see it dead, well then it has earned the right to grow here in peace. Any living thing that strives to overcome such adversity while trying to make the world a more beautiful place is A-OK in my book.