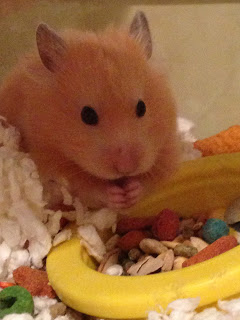 This is Berry, my daughter’s pet hamster.  Unlike the dwarf hamsters she’s had in the past, Berry is a full-sized hamster that is very sociable. She tries to interact with you the moment you walk into the room, and she loves chewing on anything and everything she can wrap her teeth around.

For the past few weeks, Berry has been climbing on the furniture in her enclosure, trying to knock the lid off. We had to remove her exercise wheel because of all the racket she was making, and put a second level on the enclosure so that she could satisfy her urge to climb. My daughter also lets Berry run around her bedroom in a clear plastic exercise ball whenever she gets the chance.

Yet Berry still had the urge to wander.  Last night, while my daughter slept, Berry figured out a way to unlock the lid on her enclosure, and escaped off into the night. She must have climbed down from the dresser, ran along the baseboard heater, and found the small hole in the wall where the pipes go through.  When I went to wake up my daughter this morning, the lid was ajar, and Berry was gone.

I’m not sure what sort of misbegotten adventures young Berry got herself into during her time spent exploring the nooks and crannies of our home, but she eventually emerged in the Family Room (located one floor below my daughter’s room–a long way down!) at around 7:30pm.  Our dog, Scooter, spotted her behind the TV entertainment center and alerted us to her presence by wagging his tail and pointing to her with his nose. My daughter got Berry’s exercise ball and called to her, and the hamster scurried right over and into the ball as if nothing had happened.

We’re all very glad that Berry is back, safe and sound. Scooter got an extra special dinner (liverwurst mixed in with his kibble) and Berry got some extra exercise ball playtime.

The lid on Berry’s enclosure is now weighed down with a big, heavy book. We’ll see how long it takes little Miss Houdini to figure out an exit strategy.