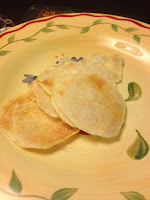 My sister-in-law had a Pampered Chef event awhile back, so I decided to buy their Microwave Chip Maker.  The claim: you can make delicious, crispy potato chips at home in just 2 minutes without ANY fat or oil.  Sounds too good to be true, but the results were surprisingly good!

I’ve said this before when I review something here on the blog, but it bears repeating: I do not get any sort of compensation of ANY kind from the manufacturers of the products I review. I’ve been contacted in the past after posting a positive review, with offers of coupons and such, and I never take them up on it. I don’t include links or ads or any of that, because I want whoever is reading these reviews to know that I don’t have any reason to be anything other than brutally honest when it comes to whether or not this stuff is worth spending your hard-earned money on. 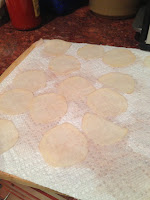 In the case of the Microwave Chip Maker, I have to say–it was a good purchase. I also bought the Simple Slicer, because I don’t have a mandolin slicer, and that made a big difference, too. There’s no way I would have been able to get such nice, evenly thin slices using my usual old metal grater. I suppose I could have used my food processor with the slicer attachment, but that’s a huge pain in the neck to haul out every time you want a quick snack. It’s essential that the potatoes be sliced really thin (1mm–setting number 1 on the Pampered Chef Slicer), and that you lay them out on paper towels so that you can blot away the excess moisture.  I salted the slices, waited a few minutes, then dabbed at them with another paper towel to get the rest of the moisture that came through.   They only took about 2 minutes in the microwave, and were every bit as crispy as the ones you buy at the store. 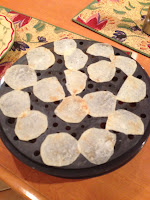 I didn’t blot the first batch as well as I did subsequent batches, and two minutes wasn’t quite long enough in terms of cooking time.  I also noticed that some batches cooked darker than others, so it’s a good idea to keep an eye on the chips and check them as they’re cooking.

The instructions say that you can also make sweet potato chips or apple chips, which is something I’ll try next time.

Note: I have included links to a similar microwave chip maker that is available on Amazon.com.