Last year, I met a true craftsman at the Rennaissance Faire in NY. His name was Steve Vlasich, and he and his wife Cindy are the owners of Clear Creations. Steve is a glass artist, crafting custom-made designs of all shapes and sizes. He had all types of birds and griffins and dragons for sale, all of them handmade and one-of-a-kind. He was so adept at manipulating the molten glass, which wasn’t surprising once he told me that he’d been honing the skill since he was a young boy.

As I watched him work, I asked 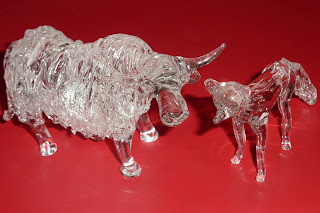 what his favorite thing was to make, and he said, “I love making stuff that I’ve never done before, but at this point, there’s not a lot that fits into that category.” It wasn’t until later that I thought of something that would probably fit the bill: a Yak, which also happens to be the first three letters of my married surname.

My maiden name is derived from the word “Fox”, so I’ve always had an affinity for foxes. I bought a small fox figurine when I went to Italy four years ago, but good luck trying to find anything with a Yak on it.

Fortunately, I took Steve’s business card and emailed him my request. He accepted the challenge, and after sending him about a half a dozen pictures, he set to work. It was the first Yak he ever created, and he said that really enjoyed doing it. He also made me a Fox to go with it. I just picked them up today, and I couldn’t be more pleased with how they turned out. Thanks, Steve & Cindy!

2 thoughts on “When the Yak met the Fox”