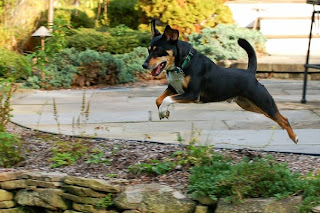 It has been almost a year since we got our dog. We have a large yard, but it’s not enclosed, and we’d hoped to be able to train the dog to be off-leash without having to install fence. After 12 months of using a 40-foot tie-out line, not to mention a few harrowing off-leash training sessions gone awry, we finally decided to get the Invisible Canine Fence system.

My neighbors have this system for their yellow lab, and they swear by it. Now that we’ve installed one ourselves, I have to agree: it’s the best money we’ve ever spent on our dog.

First, the company sends out representatives to mark off all of your utility wires (sprinklers, cable, telephone) so that they can steer clear of those. Then, they bury a wire within 2 feet of wherever you want the border to be. You can run it around the perimeter of your property, and also around places within that perimeter that you want off limits, like a koi pond or a flower bed or rabbit hutch area, etc. They put white flags up to mark where the buried wire is. (Eventually you remove those.)

This company (Canine Fence) primarily uses audible technology/training/praise to teach the dog the perimeter, which is why they are endorsed by so many veterinarian associations. Their competitor uses “graduated correction technology” which means electric zaps that increase in intensity as the dog gets closer to the perimeter. All that does is tests the dog’s pain threshold.

With this system, whenever the dog gets within 18″ to 24″ of the buried wire, he starts to hear a series of beeps. After the 5th beep, if the rubber stoppers are off the metal prongs on the collar, he’ll get a shock (they call it a “correction”, I call it a “zap”). So, the dog gets a fair warning to back it up–zapping only happens if he ignores the beeping.

For the first 4 days, you’re supposed to keep the stoppers on and walk the dog out in the yard on the leash. As soon as he gets close enough to hear the beeps, you give a slight tug on the leash, run like hell in the other direction, and praise the heck out of the dog when he runs away from the sound. Lots of kisses and pats and “Good boy!” praise. Do that over and over and over, all around the perimeter, for 10 minute sessions several times a day.

By Day 5, you take the stoppers off, and walk him on the leash again, but this time, don’t tug him at all. Have a family member walk casually through the perimeter. The dog will try to follow. If he ignores the beeps…zap. Then, you spend 3 days teaching him to ignore a variety of other distractions: throw a ball through the fence, a favorite toy, etc. The dog has to learn to resist temptation and stop at the edge.

You’re not supposed to encourage the dog to go through the fence in any way…no calling to him or teasing, etc. It was surprisingly effective right from the start with Scooter, but then, he is so eager to please. 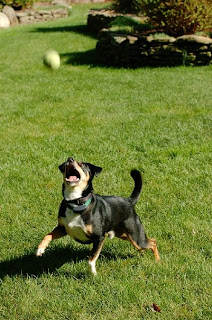 After a few days of “distraction” tests, you can let the dog off the leash and supervise him outside. That lasts for two weeks. Then, you can have the dog out there on his own, and watch from inside the house to see how he does. After the 4 weeks is over, you start gradually removing the visual reminder flags, and that’s it.

I did the training as stipulated, for the most part. After only 3 days of praise, my dog was ready for the “correction”, and it only took one little zap for him to fully understand that beeps = stay away. After a couple of days’ worth of distractions, he was perfect.

He’s now able to run and jump and scramble all over the place, without being tethered to anything. He loves it!

Our fence cost us about $1000 for a 1/2 acre of coverage. It was well worth it, and my neighbor had a coupon for $200 off, so we saved quite a bit off the standard price. If you have less property, the fence costs even less.