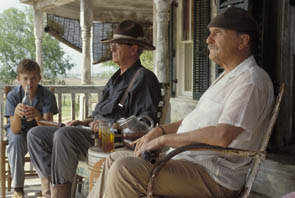 Ever seen this one?

It’s from 2003, and stars Haley Joel Osmet (only slightly more grown up than his “I see dead people” days), Kyra Sedgwick, Michael Caine, and Robert Duvall.

What a gem of a movie this is. It’s rated PG and is one of those films that will definitely appeal to a wide audience.

The story is set in the 1960s, and is about a boy with a flighty single mom who just shows up at the Texas homestead of her eccentric old uncles and drops the kid off for the summer. The uncles have led a mysterious life, having disappeared from their community for over 40 years, before returning a few years prior to the start of the story. Rumors swirl that the grumpy men have millions of dollars–obtained through nefarious means, no doubt–stashed away somewhere, and before she leaves, the mother instructs the boy to figure out where the money is so that they can steal some. 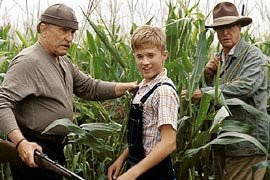 Haley Joel Osmet does a great job as Walter, but it is the uncles that steal the movie. Right away, the boy discovers clues that Uncle Hub (Robert Duvall) has led an adventurous life, and as the uncles warm up to the idea of having a young boy in their midst, Uncle Garth (Michael Caine–yes, a Brit playing a Texan) secretly starts to tell young Walter the incredible story of where they were for those 40 years.

The stories are so fantastical, it’s unclear whether or not they’re even true, but in the course of the movie, the boy learns that there are some things a person needs to believe in, whether they’re true or not.

I loved this movie.