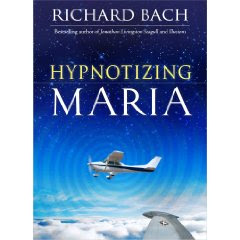 Richard Bach, one of my favorite authors (Illusions, The Ferret Chronicles, The Bridge Across Forever, One) has a new novel coming in September: Hypnotizing Maria. Here’s the summary from the publisher, Hampton Road Publishing:

Flight instructor Jamie Forbes guides a woman to landing her plane safely after her husband loses consciousness, then flies on to his own destination unimpressed by his act…flight instructors guide students every day.

Only after she tells reporters that a stranger appeared in an airplane alongside hers and hypnotized her into landing, and after he meets his own guiding stranger does he solve the bigger mystery: how each of us creates, step by step, what seems to be the solid world around us.

The best mysteries are the ones whose answers lie in front of us, in plain sight.

The best solutions are those moments when all of a sudden we realize what we’ve known all along.

The book is short–only 160 pages–so it’s inevitable that I’ll read it in one sitting and then have another long wait until Bach gets around to publishing something else. I wish the author was a bit less reclusive and wrote more, but then, that’s part of the enigma that is Richard Bach.