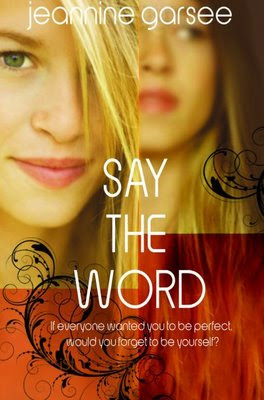 Every once in a very long while, a book will come along that captures my attention, to the point where I cannot put it down until I finish it. No matter how long a day it has been, no matter how tired I am, I just can’t go to bed until I read the final chapter and see how it all wraps up. This happened with Stephen King’s The Stand, a couple of the Harry Potter books, The DaVinci Code, Twilight, and now, with Say the Word.

This is a YA novel about Shawna Gallagher, a privileged 17-year-old whose world is rocked by a sudden phone call: her estranged mother, who destroyed their family when she left to be with another woman, has had a serious stroke. Shawna reluctantly goes to her mother’s deathbed and witnesses her final moments. Afterwards, as Shawna struggles to cope with the loss, its impact on her own life, and the devastating effect it has on the lives of her mother’s new family, she begins hearing her mother’s voice. This was an intriguing plot device that worked well, and helped the mother to remain a vital and pivotal character throughout the book, even though she dies within the first few chapters. Throughout the rest of the book, Shawna slowly pieces together the complex and surprising motivations that led her mother to give up everything for a chance at happiness.

In the process, Shawna comes into her own, learning more about herself, her dreams, and her own motivations. The thing I liked most about the book was the way Shawna’s character develops throughout the story. She is far from perfect, and there are times when you want to reach through the pages and throttle her, but her actions are always realistic and understandable. She is certainly flawed, but you can’t help rooting for her.

This book rises above the usual teen-fluff that is so rampant in YA these days, because it tackles the very real and current controversy surrounding the battle for equal rights for homosexuals. Garsee does not shy away from presenting an unflinching portrait of this issue, including the ugliness of prejudice and the stigma that is still so prevalent for those in homosexual relationships.

You’ll find underage drinking, sexual situations, and adult themes in this book, so I wouldn’t recommend it for tweens or very young teens, but high school-aged girls–and their mothers–will enjoy reading about Shawna and her coming-of-age story. It starts as a quest for Shawna to finally understand and forgive her mother, and evolves into a fascinating and poignant journey of self-discovery.