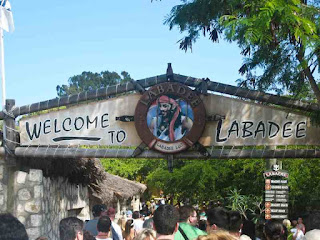 We’d been to Labadee before, during our cruise on Celebrity last February, so we knew what to expect in terms of the horrendous tendering process. When you take the elevators down to the tendering gangway on Deck 1, the doors open and you are faced with an angry mob of people barking at you to get to the back of the line…IF you can squeeze your sorry ass back there past said angry mob.

On the plus side: Celebrity & Royal Caribbean are in the process of building a dock on this private section of Haiti, so that tendering will soon be a thing of the past.

It was more of a pain to get beach towels this time around. When we took RCCL in August, all we had to do was tell our stateroom attendant how many towels we needed for the following day, and they were waiting for us in our stateroom when we turned in for the night. This time, Rich had to go up to the pool deck and sign out pool towels. I’m not sure why they changed this policy, but it was just another little annoyance (like the lack of chocolates on your pillow at bedtime and the overworked room attendants).

We left for early Labadee, so tendering wasn’t too bad this time around. We had a couple of hours to kill before our excursion, so we spent some time relaxing on the beach. Since we got there early, we were able to snag some prime beach chairs.

Here’s a video panorama…about midway through, you can see the construction cranes working at the site where the new dock will be:

Christina and I booked the Dragon’s Breath Zipline excursion, and I was already having second thoughts. It’s touted as the longest zip line over water: 500 feet high–that’s the height of two average ferris wheels stacked one on top of another–and 2,600 feet long, the equivalent of 65 Greyhound buses lined up end to end.

In the end, it was a thrilling experience, and one that I would absolutely do again in a heartbeat!

It really helped that we met up with a great guy named Larry, one of our fellow passengers on the Explorer. He was outgoing, funny, and really helped me to chill out and relax about the zipline. He’d done it before, and said it was no biggie, and for some reason, his reassurances helped to calm my nerves. (He also took the pics you see here from our excursion, since we didn’t bring our camera along with us to the zipline.)

They start by asking you to step on a scale–not exactly my favorite activity during a cruise vacation–to see what weight category you fall into. The tension on the zip lines are adjusted based on your weight, so that you don’t go too fast or too slow.

There was quite a strong headwind that day, so the minimum weight requirement was raised from 75lbs to 100lbs. I had no trouble with that. 😉

The instructors fitted us with harnesses and took us to a mini-course to get us used to the feel of zipline. This was a really smart move. The elevated platform was a bit scary, but if you freaked out here, there’s no way you could do the main zipline. They taught us the three positions to use (starfish–for when you have a tailwind and want to slow down, torpedo–for when you have a headwind and want to speed up, and chair–a standard sitting up position). Because it was windy and some folks were getting stuck before the finish line and had to be towed to the end, they encouraged us to use the torpedo position. This entails laying back, almost completely horizontal, with your arms across your chest like a mummy and your toes pointing forward. Good lord–it felt like being a corpse. You also had the option of holding onto the straps of the harness, which I did, and that felt much more secure.

Of course, Larry did the “mummy” position and flew down that practice zipline like he was shot out of a cannon. Crazy man! He loved it.

Christina and I managed to survive the mini-course, so we loaded into the jeep and headed for the big one. The ride up the mountain was scarier than the actual zipline. We saw overturned jeeps, men with rifles, and bounced around on the potholed roads like kernels of popcorn the entire way up.

Once we got to the top and waited our turn on the 500-foot-high platform, I felt strangely calm about the whole thing. The finish was so far away, we couldn’t even see it. Christina and I were right on the cusp of the lowest weight category and the next one up, so we were able to ride the zipline side by side, which was great. 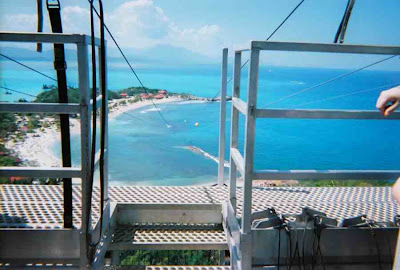 The view from the top of the platform–it’s a LONG way down!

Larry went first, naturally, did his torpedo thing, and flew down the line like a pro. One scary moment: they warned us that the winds were so strong, they could turn you sideways, making it necessary to pull on the straps to adjust yourself. Larry did go almost completely sideways at one point, because he was in the “mummy” position. I kept my hands on the straps, and when I started twisting sideways about halfway down, I was able to adjust much faster.

The ride itself was over within about a minute. They had guys waiting at the bottom to help catch you and get you out of the harness safely.

Christina and I loved it. Here’s a photo of Chris at the finish…you can see me peeking over on the left: 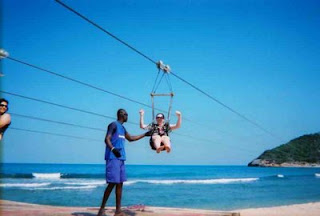 Afterwards, we were all smiles: 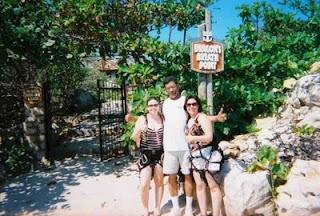 Thumbs up after surviving the zipline with our buddy, Larry

We met up with Rich and the girls to have lunch (a nice buffet BBQ spread) and spent the rest of the day bumming around on the beach. The hammocks were so relaxing! 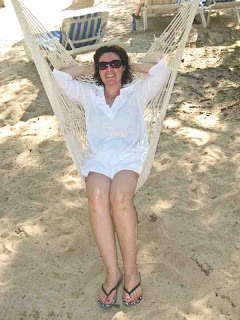 It was a great day. Back at the ship, we enjoyed some Name That Tune before dinner (It was supervised by Darryl, one of the cruise entertainment staff who was absolutely hilarious. No matter the activity, if he’s hosting it–go! You won’t be sorry!!)

Next up: Samana in the Dominican Republic. We also had to turn our clocks ahead one hour before going to bed that night.