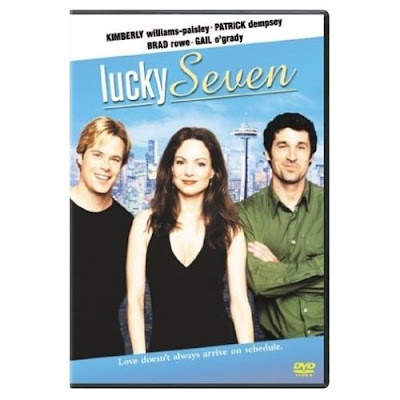 My friend Cindy recently got me hooked on Netflix (thanks, CC!) and I’ve been discovering some really sweet movies that I’d never even heard of before.

Once such movie: Lucky Seven, starring Patrick Dempsey and Kimberly Williams-Paisley. It’s definitely one of those fluff, romantic chick flicks that will send most men screaming from the room. However, if you’ve got a “girls night” planned and want something fun to pop into your DVD player for 90 minutes, this is the movie for you.

Williams-Paisley plays Amy Meyer, a young up-and-coming lawyer who has spent the years since her mother’s untimely death obsessively living her life according to a timeline that her mother sketched out for her when Amy was 7 years old. The timeline was meant as a guideline for Amy, to encourage her to finish college, aspire to a great job, and enjoy some traveling and romantic flings before settling down. Her mother told her that she ought to have 6 serious relationships in her life, and that when meets guy #7, that’ll be the one she marries.

Amy and Guy #5 break up, and the next man she meets is Daniel (actor Brad Rowe), a handsome venture capitalist with a bright future who says all the right things. Unfortunately, she is so wrapped up in the timeline, she decides to put him off until she can briefly hook up with a different guy who can fill the #6 spot, so that Daniel can be lucky #7 and they can get married. Sounds a little psycho, I know, but she’s a likable character so you go with it.

Especially because the man she chooses for #6 is Peter, played by Patrick Dempsey. He clearly likes her but she’s oblivious because she’s smitten with Daniel. Peter owns the bagel shop where she gets her breakfast every morning, and when he asks her to accompany him to a friend’s wedding–and pose as his girlfriend to make his ex jealous–she happily agrees because that will fulfill her warped timeline requirements for relationship #6, no matter how briefly it lasts.

Dempsey and Williams-Paisley have great onscreen chemistry, and although the rest of the movie is predictable, it’s still a fun one to watch. It’s also a bit heart-wrenching to see Amy’s long-delayed struggle with the loss of her mother, realizing that she has to let go of the timeline if she wants to move forward with her life and find true happiness. So yes, it’s a fluff romance, but it’s also got a deeper moral that is touching and bittersweet.

And of course, it has a happy ending. Would I recommend it if it didn’t?