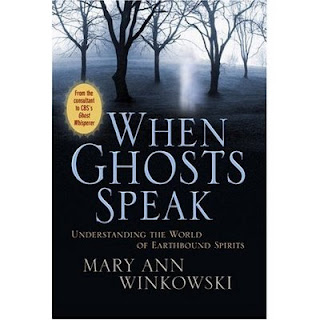 Although I do believe that there is life after death, I’m usually skeptical of folks who say they can “speak” with the dead–especially when they capitalize off of it with books and television shows. Nevertheless, I took a book out of the library recently that was really fascinating: When Ghosts Speak: Understanding the World of Earthbound Spirits. It was written by Mary Ann Winkowski, the woman who was the inspiration for the main character on The Ghost Whisperer.

In the book, Winkowski explains that she has been able to see and speak with ghosts since she was a very small child, and that she got this hereditary ability from her grandmother, who was also psychic. Starting at age 4, her grandmother used to take young Mary Ann to neighborhood funerals, so that she could pass along messages to her grandmother’s bereaved friends. So, if Winkowski is a fake, she’s been planning this con for a LONG time.

The information she has provided has been so accurate, she works closely with law enforcement officials all over the country to help them solve murder cases. The examples she cites in the book are compelling and creepy.

I must confess, I had trouble getting through the entire book, because I started to have weird dreams, nightmares and odd occurrences after reading. (I kept seeing things out of the corner of my eye that weren’t there, for example.) It’s strange, because I’ve read many other similar books by self-professed mediums (James van Praagh, John Edward, Suzane Northrup) and never suffered any ill effects. Could be the power of suggestion, but I’d be lying if I said I wasn’t relieved to return the book back to the library.

Winkowski claims that earthbound ghosts are all around us. She is not referring to ghosts who have passed into the “light”, she only communicates with those ghosts who, for whatever reason, are still tied to the earthly realm and haven’t moved on yet. She says that they can attach themselves to things, like cars, books (!) and jewelry, and that they can follow people around that they find interesting. Negative, angry ghosts feed off of angry energy, so if they attach to someone, they will follow them around and knock things over, mess with their car, break things in the house…all as a way to make the living person upset so that they can absorb the strong emotions that are evoked by the mishaps. Creepy!

The book has some interesting insight on the process of transition from life to death to what lies beyond, and her writing style is straightforward and friendly. She doesn’t try to impress you with her ability, she just talks about her gift in the same matter-of-fact way you’d discuss a favorite TV show or gas prices with a good friend over a cup of coffee at the kitchen table. Overall, I found it a fascinating, unnerving read.