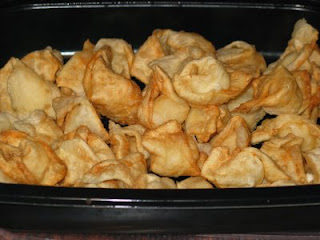 Next week, I’ll be celebrating Christmas Eve with my family, and enjoying the Italian tradition of The Feast of The Seven Fishes.

When I was little, we used to go to my grandmother’s house for Christmas Eve, and after she died, no one else was interested in carrying on the tradition. So, when I got married three years later, I decided to host the Feast at my house for my in-laws, and have been doing it ever since.

Some people make 7 Fishes, to represent the 7 Blessed Sacraments. Others prepare as many as 13 different types of fish, to represent Jesus and his 12 Apostles. I usually come in somewhere around 10 different types (which can represent the 10 commandments), because I like to have a nice variety of dishes to offer. I switch things up from year to year, too, so that it doesn’t get too predictable.

This year, I’m bringing back an appetizer that is always a big hit: Crabmeat Puffs (also known as Crab Rangoons). There is absolutely nothing even remotely Italian about them; I make them because they taste so good. I haven’t made these for the past couple of years, and my brother-in-law has been asking for them, so they’re on the menu again.

One thing that’s really great about this appetizer is that you can make it ahead of time and keep it in the fridge or freezer until the day of the party. I got the recipe from an old Betty Crocker Chinese Cookbook by Leeann Chin (copyright 1981). 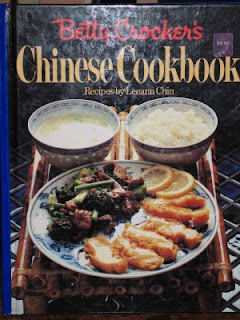 A few important notes: I’ve made two alterations to this recipe. The original one in the book calls for “frozen crabmeat, thawed, drained and cartilage removed, chopped” but the canned stuff tastes better and is easier to use. I use Starkist Fancy White crabmeat, drained, so there’s no need to chop anything.

The other change is that I use half the number of wonton skins called for in the recipe (the original one said 40 wonton skins). That’s because the Betty Crocker version uses two skins per crab puff, and I found that to be way too overpowering for the filling. I use just one skin for each and fold it as demonstrated on the package.

Making the filling couldn’t be simpler: you mix the crabmeat, cream cheese, salt and garlic powder until well blended. Then, you put a small, marble sized dollop in the center of a wonton skin. Brush the 4 sides of the wonton skin with the egg, then fold it into a triangle, pressing the side edges together to seal them. Pick up the little triangle and fold the two bottom edges down towards one another, pinching to seal. I made a video to demonstrate:

Then you need to fry them in an inch and a half of vegetable oil, heated to 350 degrees. It is definitely worth investing in a candy thermometer so that you can get the temperature just right. It makes a big difference in how quickly and even the wontons cook.

Although the cookbook says they take up to 3 minutes each, as you can see, it takes half that when you’re only using one wonton skin per puff. I also like to take them out just as they start to turn golden, so that they aren’t overcooked when I reheat them on the day of my party.

Remove them from the oil and put them on a paper towels to absorb the excess oil. When cool, place the wontons in a heat-n-serve tray with a cover, and freeze for up to 6 weeks. This recipe makes about 20 wontons, so I usually double it because they go fast!