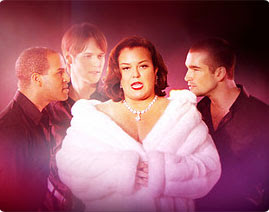 Unfortunately, I found “Rosie LIVE” to be almost totally unwatchable. The opening monologue was peppered with recycled jokes that she’d already told when she appeared on the Conan O’Brien show. Liza Minnelli did a fantastic job with her splashy musical number, but Rosie’s voice is no match for Liza’s, and her sour (although enthusiastic) backup notes really dragged down the song.

Alec Baldwin’s lascivious joke about speaking directly into the microphone affixed to Rosie’s cleavage was inappropriate for a “family” show, and just not funny. Kathy Griffin, another talented comedian that I usually love, missed the mark with her stilted and pointless Nancy Grace impersonation.

It was so weird…the show had so many elements that SHOULD have worked well, but didn’t.

Yes, there was an amazing tap dance performance, songs by Alanis Morrisette, Harry Connick Jr. and Ne-Yo, but nothing seemed to flow well with anything else. Instead of showcasing a variety of talent, it was a hodge-podge of thrown-together acts with no rhyme or reason to them. And, while Gloria Estefan is a gifted singer/songwriter, she proved herself sadly incapable of telling a simple turkey joke.

This was so disappointing. I truly wanted Rosie to succeed at this new venture, and I hope she gives it another try. Next time, though, she needs to cut the useless cameos (Conan O’Brien’s pie in the face gag, Clay Aiken’s “elephant in the room” gay references, Jane Krakowski’s strip tease) and try to make the show more cohesive and entertaining. More substance, less schtick.

When Rosie paints, she throws a bunch of colors onto the canvas and just lets it flow as the inspiration moves her. Sometimes, the final result is striking and thought-provoking, but other times, it’s just a big ole mess.

Creating a work of art should be something one does purely for oneself. To quote Ricky Nelson’s Garden Party, “I learned my lesson well. You can’t please everyone, so you have to please yourself.”

Trouble is, if you’re hired to put on a prime-time variety show, you’re going to have to think about your audience a bit more, and try a little harder to create something that will appeal to others.