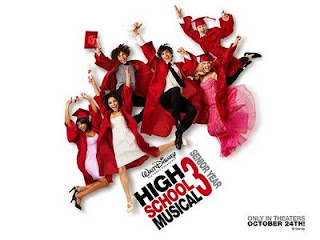 Took the girls to see High School Musical 3 this afternoon. My teenager went last night with her best friend, and they thought it was kinda lame, but my younger daughters loved it. I thought the movie was less of an ensemble piece, and focused much more heavily on Zac Efron this time around. Disney is definitely grooming him for bigger and better things.

Ashley Tilsdale’s Sharpay character was like an afterthought in this sequel, and Gabriela was used purely as Troy’s arm candy.

Nevertheless, it was a family-friendly film and the music was quite catchy. So, overall, a thumbs-up from me!