I got an email today from a friend and fellow member of UNICO, an Italian American service organization that raises money for charity, awards scholarships to deserving students, performs community service, and promotes a positive image of Italian-American culture and values.

He recently came across this t-shirt, produced by the Lucky Brand: 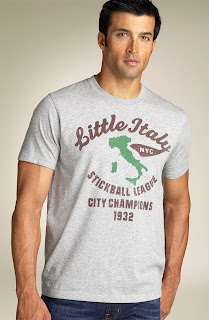 He found the shirt very offensive to Italian-Americans. I’ll be honest…at first, I couldn’t understand what the fuss was all about. Then, I took a closer look at the back of the shirt: 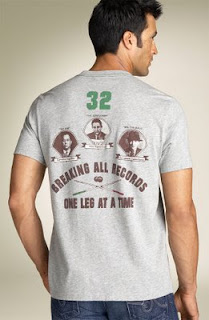 It depicts three “organized crime” figures with mugshots at the top, and proclaims that their team will be breaking records “one leg at a time.”

The good news: my friend wrote to Nordstrom’s, the department store that was carrying this shirt, and they responded immediately. They agreed with him that the shirt crossed the line from “good spirited fun” to unacceptable stereotyping, and will no longer carry it in their stores or online. In fact, I checked their website today, and the item is listed as “not available.”

I’m proud of my friend for speaking up. Even though it’s upsetting, it’s tempting to try and laugh off this kind of smear, or let it slide and look the other way. I’m glad he did something about it, and that the store was so responsive to his concerns. As a writer, I’m a big believer in freedom of expression, but I, too, believe that this shirt design was gratuitous and hurtful.

I know there are some bad apples out there that have given Italians a bad reputation, but the vast majority of Italian-Americans are hard-working, honest people who helped build up this country and make it great. My grandparents came here in 1920, with a dream for a better life. They immediately learned the language, worked hard at an honest living, and loved this country with fierceness and loyalty. They’re long-since gone now, but their pride in this country and the opportunities it presents for those who are willing to devote themselves to America lives on. They deserve better than cheap-shot gangster jokes aimed at selling a few t-shirts.

1 thought on “Speaking Up for Italian-Americans”